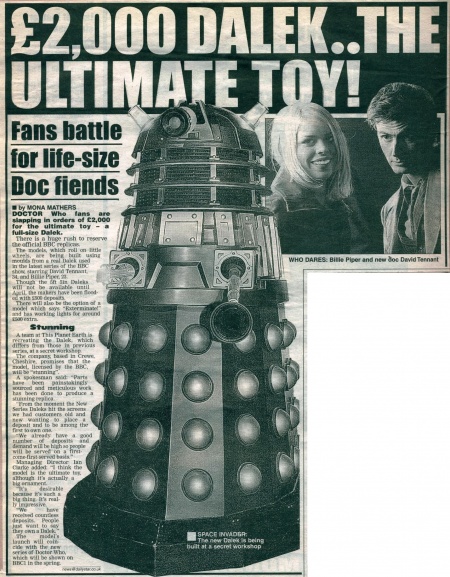 DOCTOR Who fans are slapping in orders of £2,000 for the ultimate toy - a full-size Dalek.

There is a huge rush to reserve the official BBC replicas.

The models, which roll on little wheels, are being built using moulds from a real Dalek used in the latest series of the BBC show, starring David Tennant, 34, and Billie Piper, 23.

Though the 5ft 5in Daleks will not be available until April, the makers have been flooded with £500 deposits.

There will also be the option of a model which says "Exterminate!" and has working lights for around £500 extra.

A team at This Planet Earth is recreating the Dalek, which differs from those in previous series, at a secret workshop.

The company, based in Crewe, Cheshire, promises that the model, licensed by the BBC, will be "stunning".

A spokesman said: "Parts to have been painstakingly sourced and meticulous work has been done to produce a stunning replica.

"From the moment the New Series Daleks hit the screens we had customers old and new wanting to place a deposit and to be among the first to own one.

"We already have a good number of deposits and demand will be high so people will be served on a first-come-first-served basis." Managing Director Ian Clarke added: "I think the model is the ultimate toy, although it's actually a big ornament.

"It's desirable because it's such a big thing. It's really impressive.

"We have received countless deposits. People just want to say they own a Dalek."

The model's launch will coincide with the new series of Doctor Who, which will be shown on BBC1 in the spring.

Caption: SPACE INVADER: The new Dalek is being built at a secret workshop