£2m sales for the man who makes Daleks 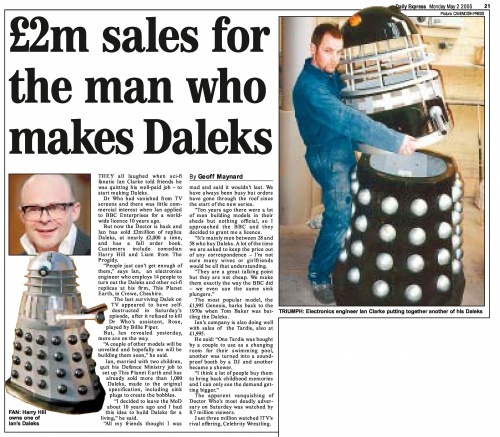 THEY all laughed when sci-fi fanatic Ian Clarke told friends he was quitting his well-paid job — to start making Daleks.

Dr Who had vanished from TV screens and there was little commercial interest when Ian applied to BBC Enterprises for a worldwide licence 10 years ago.

But now the Doctor is back and Ian has sold £2million of replica Daleks, at nearly £2,000 a time, and has a full order book. Customers include comedian Harry Hill and Liam from The Progidy.

"People just can't get enough of them," says Ian, an electronics engineer who employs 14 people to turn out the Daleks and other sci-fi replicas at his firm, This Planet Earth, in Crewe, Cheshire.

The last surviving Dalek on TV appeared to have self-destructed in Saturday's episode, after it refused to kill Dr Who's assistant, Rose, played by Billie Piper.

But, Ian revealed yesterday, more are on the way.

"A couple of other models will be unveiled and hopefully we will be building them soon," he said.

Ian, married with two children, quit his Defence Ministry job to set up This Planet Earth and has already sold more than 1,000 Daleks, made to the original specification, including sink plugs to create the bobbles.

"I decided to leave the MoD about 10 years ago and I had this idea to build Daleks for a living," he said.

"All my friends thought I was mad and said it wouldn't last. We have always been busy but orders have gone through the roof since the start of the new series.

"Ten years ago there were a lot of men building models in their sheds but nothing official, so I approached the BBC and they decided to grant me a licence.

"It's mainly men between 28 and 58 who buy Daleks. A lot of the time we are asked to keep the price out of any correspondence — I'm not sure many wives or girlfriends would be all that understanding.

"They are a great talking point but they are not cheap. We make them exactly the way the BBC did — we even use the same sink plungers."

The most popular model, the £1,995 Genesis, harks back to the 1970s when Tom Baker was battling the Daleks.

Ian's company is also doing well with sales of the Tardis, also at £1,995.

He said: "One Tardis was bought by a couple to use as a changing room for their swimming pool, another was turned into a soundproof booth by a DJ and another became a shower.

"I think a lot of people buy them to bring back childhood memories and I can only see the demand getting bigger."

The apparent vanquishing of Doctor Who's most deadly adversary on Saturday was watched by 8.7 million viewers.

Caption: TRIUMPH: Electronics engineer Ian Clarke putting together another of his Daleks