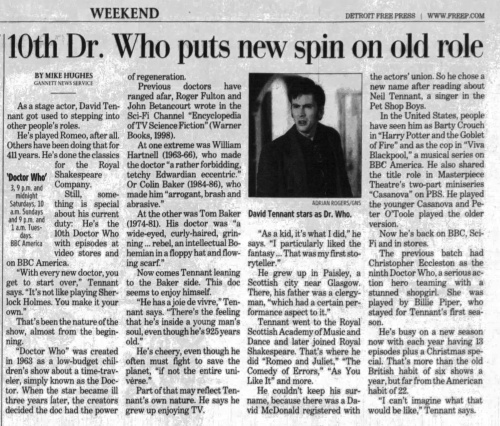 As a stage actor, David Tennant got used to stepping into other people's roles.

He's played Romeo, after all. Others have been doing that for 411 years. He's done the classics for the Royal Shakespeare Company.

Still, something is special about his current duty: He's the 10th Doctor Who with episodes at video stores and on BBC America.

"With every new doctor, you get to start over," Tennant says. "It's not like playing Sherlock Holmes. You make it your own."

That's been the nature of the show, almost from the beginning.

"Doctor Who" was created in 1963 as a low-budget children's show about a time-traveler, simply known as the Doctor. When the star became ill three years later, the creators decided the doc had the power of regeneration.

At one extreme was William Hartnell (1963-66), who made the doctor "a rather forbidding, tetchy Edwardian eccentric." Or Colin Baker (1984-86), who made him "arrogant, brash and abrasive."

At the other was Tom Baker (1974-81). His doctor was "a wide-eyed, curly-haired, grinning ... rebel, an intellectual Bohemian in a floppy hat and flowing scarf."

Now comes Tennant leaning to the Baker side. This doc seems to enjoy himself.

"He has a joie de vivre," Tennant says. "There's the feeling that he's inside a young man's soul, even though he's 925 years old."

He's cheery, even though he often must fight to save the planet, "if not the entire universe."

Part of that may reflect Tennant's own nature. He says he grew up enjoying TV.

"As a kid, it's what I did," he says. "I particularly liked the fantasy ... That was my first storyteller."

He grew up in Paisley, a Scottish city near Glasgow. There, his father was a clergyman, "which had a certain performance aspect to it."

Tennant went to the Royal Scottish Academy of Music and Dance and later joined Royal Shakespeare. That's where he did "Romeo and Juliet," "The Comedy of Errors," "As You Like It" and more.

He couldn't keep his surname, because there was a David McDonald registered with the actors' union. So he chose a new name after reading about Neil Tennant, a singer in the Pet Shop Boys.

In the United States, people have seen him as Barty Crouch in "Harry Potter and the Goblet of Fire" and as the cop in "Viva Blackpool," a musical series on BBC America. He also shared the title role in Masterpiece Theatre's two-part miniseries "Casanova" on PBS. He played the younger Casanova and Peter O'Toole played the older version.

Now he's back on BBC, Sci-Fi and in stores.

The previous batch had Christopher Eccleston as the ninth Doctor Who, a serious action hero teaming with a stunned shopgirl. She was played by Billie Piper, who stayed for Tennant's first season.

He's busy on a new season now with each year having 13 episodes plus a Christmas special. That's more than the old British habit of six shows a year, but far from the American habit of 22.

"I can't imagine what that would be like," Tennant says.