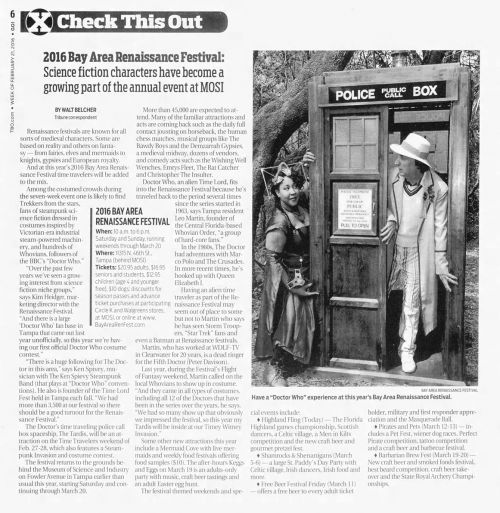 Renaissance festivals are known for all sorts of medieval characters. Some are based on reality and others on fantasy — from fairies, elves and mermaids to knights, gypsies and European royalty.

And at this year's 2016 Bay Area Renaissance Festival time travelers will be added to the mix.

Among the costumed crowds during the seven-week event one is likely to find Trekkers from the stars, fans of steampunk science fiction dressed in costumes inspired by Victorian-era industrial steam-powered machinery, and hundreds of Whovians, followers of the BBC's "Doctor Who."

"Over the past few years we've seen a growing interest from science fiction niche groups," says Kim Heidger, marketing director with the Renaissance Festival. "And there is a large 'Doctor Who' fan base in Tampa that came out last year unofficially, so this year we're having our first official Doctor Who costume contest."

"There is a huge following for The Doctor in this area," says Ken Spivey, musician with The Ken Spievy Steampunk Band (that plays at "Doctor Who" conventions). He also is founder of the Time Lord Fest held in Tampa each fall. "We had more than 3,500 at our festival so there should be a good turnout for the Renaissance Festival."

The Doctor's time traveling police call box spaceship, The Tardis, will be an attraction on the Time Travelers weekend of Feb. 27-28, which also features a Steam-punk Invasion and costume contest.

The festival returns to the grounds behind the Museum of Science and Industry on Fowler Avenue in Tampa earlier than usual this year, starting Saturday and continuing through March 20.

More than 45,000 are expected to attend. Many of the familiar attractions and acts are coming back such as the daily full contact jousting on horseback, the human chess matches, musical groups like The Bawdy Boys and the Demzarrah Gypsies, a medieval midway, dozens of vendors, and comedy acts such as the Wishing Well Wenches, Emrys Fleet, The Rat Catcher and Christopher The Insulter.

Doctor Who, an alien Time Lord, fits into the Renaissance Festival because he's traveled back to the period several times since the series started in 1963, says Tampa resident Leo Martin, founder of the Central Florida-based Whovian Order, "a group of hard-core fans."

In the 1960s, The Doctor had adventures with Marco Polo and The Crusades. In more recent times, he's hooked up with Queen Elizabeth I.

Having an alien time traveler as part of the Renaissance Festival may seem out of place to some but not to Martin who says he has seen Storm Troopers, "Star Trek" fans and even a Batman at Renaissance festivals.

Martin, who has worked at WDLF-TV in Clearwater for 20 years, is a dead ringer for the Fifth Doctor (Peter Davison).

Last year, during the Festival's Flight of Fantasy weekend, Martin called on the local Whovians to show up in costume. "And they came in all types of costumes, including all 12 of the Doctors that have been in the series over the years, he says. "We had so many show up that obviously we impressed the festival, so this year my Tardis will be inside at our Timey Wimey Invasion."

Some other new attractions this year include a Mermaid Cove with live mermaids and weekly food festivals offering food samples ($10). The after-hours Keggs and Eggs on March 19 is an adults-only party with music, craft beer tastings and an adult Easter egg hunt.

The festival themed weekends and special events include:

When:10 a.m. to 6 p.m. Saturday and Sunday, running weekends through March 20

Tickets: $20.95 adults. $16.95 seniors and students. $12.95 children (age 4 and younger free), $10 dogs: discounts for season passes and advance ticket purchases at participating Circle K and Walgreens stores, at MOST, or online at www. BayAreaRenFest.com

Caption: Have a "Doctor Who" experience at this year's Bay Area Renaissance Festival.