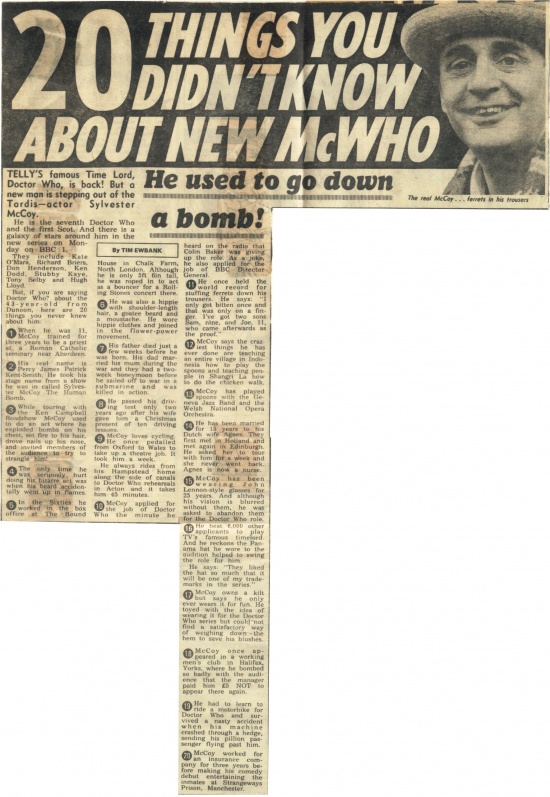 He used to go down a bomb!

TELLY'S famous Time Lord, Doctor Who, is back! But a new man is stepping out of the Tardis—actor Sylvester McCoy.

He is the seventh Doctor Who and the first Scot. And there is a galaxy of stars around him in the new series on Monday on BBC 1.

But, if you are saying Doctor Who' about the 43-year-old from Dunoon, here are 20 things you never knew about him:

1 When he was 11, McCoy trained for three years to be a priest at a Roman Catholic seminary near Aberdeen.

2 His real name is Percy James Patrick Kent-Smith. He took his stage name from a show he was in called Sylvester McCoy The Human Bomb.

3 While touring with the Ken Campbell Roadshow McCoy used to do an act where he exploded bombs on his chest, set fire to his hair, drove nails up his nose, and invited members of the audience to try to strangle him!

4 The only time he was seriously hurt doing his bizarre act was when his beard accidentally went up in flames.

5 In the Sixties he worked in the box office at The Round House in Chalk Farm North London. Although he is only 5ft 6in tall, he was roped in to act as a bouncer for a Rolling Stones concert there.

6 He was also a hippie with shoulder-length hair, a goatee beard and a moustache. He wore hippie clothes and joined in the flower-power movement.

7 His father died just a few weeks before he was born. His dad married his mum during the war and they had a two-week honeymoon before he sailed off to war in a submarine and was killed in action.

8 He passed his driving test only two years ago after his wife gave him a Christmas present of ten driving lessons.

9 McCoy loves cycling. He once pedalled from Oxford to Wales to take up a theatre job. It took him a week.

He always rides from his Hampstead home along the side of canals to Doctor Who rehearsals in Acton and it takes him 45 minutes.

11 He once held the world record for stuffing ferrets down his trousers. He says: "I only got bitten once and that was only on a finger. I've got two sons Sam, nine, and Joe, 11, who came afterwards as the proof."

12 McCoy says the craziest things he has ever done are teaching an entire village in Indonesia how to play the spoons and teaching people in Shangri La how to do the chicken walk.

13 McCoy has played spoons with the Geneva Jazz Rand and the Welsh National Opera Orchestra.

14 has been married for 15 years to his Dutch wife Agnes. They first met in Holland and met again in Edinburgh. He asked her to tour with him for a week and she never went back. Agnes is now a nurse.

15 McCoy has been wearing John Lennon-style glasses for 25 years. And although his vision is blurred without them, he was asked to abandon them for the Doctor Who role.

16 He beat 8,000 other applicants to play TV's famous timelord. And he reckons the Panama hat he wore to the audition helped to swing the role for him.

He says: "They liked the hat so much that it will be one of my trademarks in the series."

17 McCoy owns a kilt but says he only ever wears it for fun. He toyed with the idea of wearing it for the Doctor Who series but could not find a satisfactory way of weighing down the hem to save his blushes.

18 McCoy once appeared in a working men's club in Halifax, Yorks, where he bombed so badly with the audience that the manager paid him £5 NOT to appear there again.

19 He had to learn to ride a motorbike for Doctor Who and survived a nasty accident when his machine crashed through a hedge, sending his pillion passenger flying past him.

20 McCoy worked for an insurance company for three years before making his comedy debut entertaining the inmates at Strangeways Prison, Manchester.

Caption: The real McCoy .. ferrets in his trousers