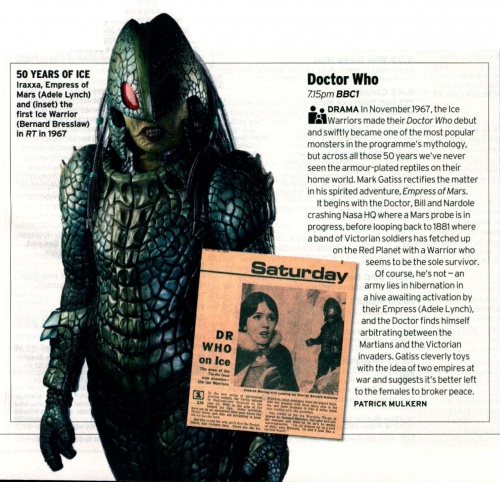 In November 1967, the Ice Warriors made their Doctor Who debut and swiftly became one of the most popular monsters in the programme's mythology, but across all those 50 years we've never seen the armour-plated reptiles on their home world. Mark Gatiss rectifies the matter in his spirited adventure, Empress of Mars.

It begins with the Doctor, Bill and Nardole crashing Nasa HQ where a Mars probe is in progress, before looping back to 1881 where a band of Victorian soldiers has fetched up on the Red Planet with a Warrior who seems to be the sole survivor.

Of course, he's not — an army lies in hibernation in a hive awaiting activation by their Empress (Adele Lynch), and the Doctor finds himself arbitrating between the Martians and the Victorian invaders. Gatiss cleverly toys with the idea of two empires at war and suggests it's better left to the females to broker peace.