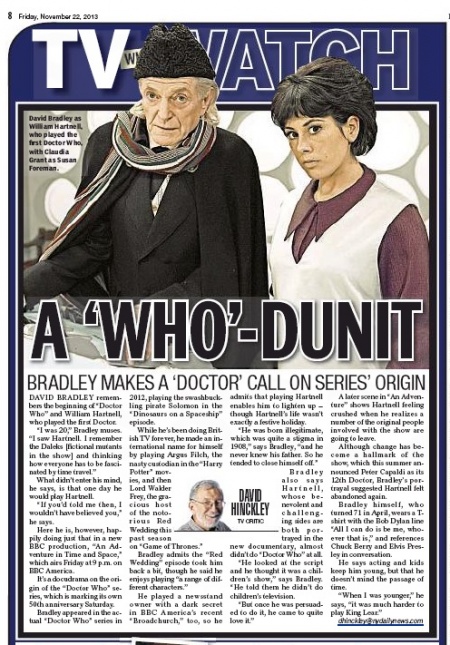 "I was 20," Bradley muses. "I saw Hartnell. I remember the Daleks [fictional mutants in the show] and thinking how everyone has to be fascinated by time travel."

What didn't enter his mind, he says, is that one day he would play Hartnell.

"If you'd told me then, I wouldn't have believed you," he says.

Here he is, however, happily doing just that in a new BBC production, "An Adventure in Time and Space," which airs Friday at 9 p.m. on BBC America.

It's a docudrama on the origin of the "Doctor Who" series, which is marking its own 50th anniversary Saturday.

Bradley appeared in the actual "Doctor Who" series in 2012, playing the swashbuckling pirate Solomon in the "Dinosaurs on a Spaceship" episode.

While he's been doing British TV forever, he made an international name for himself by playing Argus Filch, the nasty custodian in the "Harry Potter" movies, and then Lord Walder Frey, the gracious host of the notorious Red Wedding this past season on "Game of Thrones."

Bradley admits the "Red Wedding" episode took him back a bit, though he said he enjoys playing "a range of different characters."

He played a newsstand owner with a dark secret in BBC America's recent "Broadchurch," too, so he admits that playing Hartnell enables him to lighten up — though Hartnell's life wasn't exactly a festive holiday.

"He was born illegitimate, which was quite a stigma in 1908," says Bradley, "and he never knew his father. So he tended to close himself off."

Bradley also says Hartnell, whose benevolent and challenging sides are both portrayed in the new documentary, almost didn't do "Doctor Who" at all.

"He looked at the script and he thought it was a children's show," says Bradley. "He told them he didn't do children's television.

"But once he was persuaded to do it, he came to quite love it."

A later scene in "An Adventure" shows Hartnell feeling crushed when he realizes a number of the original people involved with the show are going to leave.

Although change has become a hallmark of t he show, which this summer announced Peter Capaldi as its 12th Doctor, Bradley's portrayal suggested Hartnell felt abandoned again.

Bradley himself, who turned 71 in April, wears a Tshirt with the Bob Dylan line "All I can do is be me, whoever that is," and references Chuck Berry and Elvis Presley in conversation.

He says acting and kids keep him young, but that he doesn't mind the passage of time.

"When I was younger," he says, "it was much harder to play King Lear."