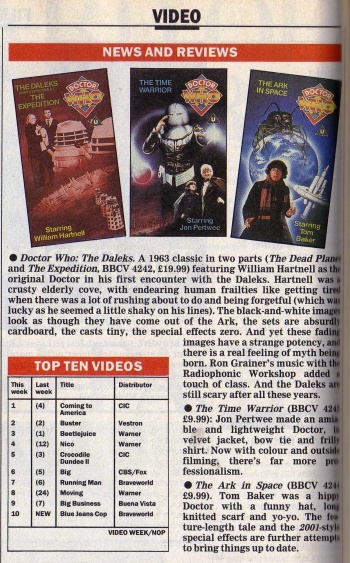 • Doctor Who: The Daleks. A 1963 classic in two parts (The Dead Planet and The Expedition, BBCV 4242, £19.99) featuring William Hartnell as the original Doctor in his first encounter with the Daleks. Hartnell was a crusty elderly cove, with endearing human frailties like getting tired when there was a lot of rushing about to do and being forgetful (which was lucky as he seemed a little shaky on his lines). The black-and-white images look as though they have come out of the Ark, the sets are absurdly cardboard, the casts tiny, the special effects zero. And yet these fading images have a strange potency, and there is a real feeling of myth being born. Ron Grainer's music with the Radiophonic Workshop added a touch of class. And the Daleks are still scary after all these years.

• The Time Warrior (BBCV 4245 £9.99): Jon Pertwee made an amiable and lightweight Doctor, in velvet jacket, bow tie and frilly shirt. Now with colour and outside filming, there's far more professionalism.

• The Ark in Space (BBCV 4244 £9.99). Tom Baker was a hippy Doctor with a funny hat, long knitted scarf and yo-yo. The feature-length tale and the 2001-style special effects are further attempts to bring things up to date.