A Doctor For All Time 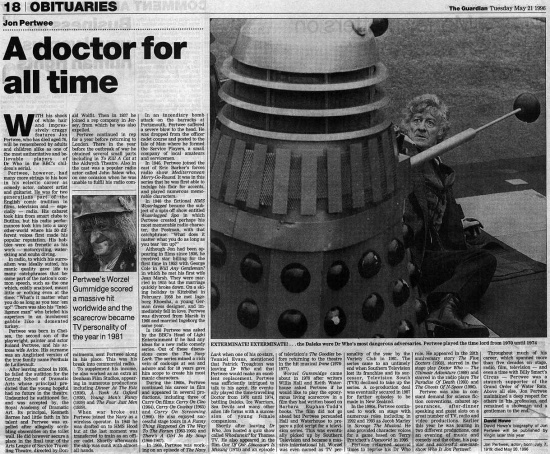 WITH his shock of white hair and impressively craggy features Jon Pertwee, who has died aged 76, will be remembered by adults and children alike as one of the most authoritative and believable players of Dr Who in the BBC's children's serial.

Pertwee, however, had many more strings to his bow in his eclectic career as comedy actor, cabaret artist and guitarist. He was for two generations part of the English comic tradition in films, television and - especially - radio. His cabaret took him from smart clubs to Butlins, but his radio performances took him into a zany other-world where his 50 different voices first made his popular reputation. His hobbies were as frenetic as his work - motorcycling, water-skiing and scuba diving.

In radio, to which his surrealism was ideally suited, his manic quality gave life to many catchphrases that became part of the nation's common speech, such as the one which, coldly analysed, meant little or nothing even at the time: "What's it matter what you do as long as you tear 'em up!" There was also his "Intelligence man" who briefed his superiors in an incoherent gabble like a demented turkey.

Pertwee was born in Chelsea, the second son of the playwright, painter and actor Roland Pertwee, and his actress wife Avice. His surname was an Anglicised version of the true family name Perthuis de Laillevault.

After leaving school in 1936, he failed the audition for the Central School of Dramatic Arts whose principal predicted that the young hopeful had no future in the theatre. Undaunted he auditioned for, and was accepted by, the Royal Academy of Dramatic Art. Its principal, Kenneth Barnes had little faith in his talent and Pertwee was expelled after allegedly scribbling obscenities on the toilet wall. He did however secure a place in the final tour of the Arts League of Service Travelling Theatre, directed by Donald Wolfit. Then in 1937 he joined a rep company in Jersey, from which he was also expelled.

Pertwee continued in rep for a year before returning to London. There in the year before the outbreak of war he obtained several small parts including in To Kill A Cat at the Aldwych Theatre. Also in the cast was a popular radio actor called John Salew who, on one occasion when he was unable to fulfil his radio commitments, sent Pertwee along in his place. This was his break into commercial radio.

To supplement his income, he also worked as an extra at Denham Film Studios, appearing in numerous productions including Dinner At The Ritz (1936), A Yank At Oxford (1938), Young Man's Fancy (1939) and The Four Just Men (1939).

When war broke out Pertwee joined the Navy as a wireless operator. In 1940 he was drafted on to HMS Hood but at the last moment was transferred to train as an officer cadet. Shortly afterwards the ship was sunk with almost all hands.

In an incendiary bomb attack on the barracks at Portsmouth, Pertwee suffered a severe blow to the head. He was dropped from the officer cadet course and posted to the Isle of Man where he formed the Service Players, a small company of local amateurs and servicemen.

In 1946, Pertwee joined the cast of Eric Barker's forces radio show Mediterranean Merry-Go-Round. It was in this series that he was first able to indulge his flair for accents, and played numerous memorable characters.

In 1948 the fictional HMS Waterlogged became the subject of a spin-off show entitled Waterlogged Spa in which Pertwee created perhaps his most memorable radio character, the Postman, with that catchphrase: "What does it matter what you do as long as you tear 'em up?"

Although Jon had been appearing in films since 1936, he received star billing for the first time in 1953 with George Cole in Will Any Gentleman? in which he met his first wife Jean Marsh. They were married in 1955 but the marriage quickly broke down. On a skiing holiday to Kitzbuhel in February 1958 he met Ingeborg Rhoesha, a young German dress designer, and immediately fell in love. Pertwee was divorced from Marsh in 1960 and married Ingeborg the same year.

In 1958 Pertwee was asked by the BBC's Head of Light Entertainment if he had any ideas for a new radio comedy series. Out of these discussions came the The Navy Lark. The series mined a rich vein of cock -ups at sea and ashore and for 18 years gave him scope to create his most manic characters.

In 1969, Pertwee was working on an episode of The Navy Lark when one of his co-stars, Tenniel Evans, mentioned that Patrick Troughton was leaving Dr Who and that Pertwee would make an excellent replacement. Pertwee was sufficiently intrigued to talk to his agent. He eventually played the time-travelling Doctor from 1970 until 1974, battling Daleks, Ice Warriors, Sea Devils and many other alien life forms with a succession of young female companions.

Shortly after leaving Dr Who, Jon hosted a quiz show called Whodunnit? for Thames TV. He also appeared in the film One Of Our Dinosaurs Is Missing (1975) and an episode of television's The Goodies before returning to the theatre in the hit musical Irene (1976-1977).

Worzel Gummidge came about in 1979 after writers Willis Hall and Keith Waterhouse asked Pertwee if he would like to play the eponymous living scarecrow in a film they had written based on Barbara Euphan-Todd's books. The film did not go ahead but Pertwee persuaded Hall and Waterhouse to prepare a pilot script for a television series. This was eventually picked up by Southern Television and became a massive international hit. Worzel was even named as TV personality of the year by the Variety Club in 1981. The series came to an untimely end when Southern Television lost its franchise and its successor, Television South (TVS) declined to take up the series. A co-production deal was eventually secured in 1987 for further episodes to be made in New Zealand.

In the 1990s, Pertwee continued to work on stage with numerous roles including in 1992 and 1993 as Jacob Marley in Scrooge The Musical. He also provided character voices for a game based on Terry Pratchett's Discworld in 1995.

Pertwee returned several times to reprise his Dr Who role. He appeared in the 20th anniversary story The Five Doctors (1983), starred in the stage play Doctor Who - The Ultimate Adventure (1989) and starred in the radio plays The Paradise Of Death (1993) and The Ghosts Of N-Space (1996).

Pertwee was also in constant demand for science fiction conventions, cabaret appearances, after-dinner speaking and guest slots on a great number of TV, radio and video productions. Earlier this year he was touring in two different productions, one an evening of music and comedy and the other, his popular and successful one-man-show Who Is Jon Pertwee?.

Throughout much of his career, which spanned more than five decades on stage, radio, film, television - and even a time with Billy Smart's Circus - Pertwee was a staunch supporter of the Grand Order of Water Rats. Above all else, Jon Pertwee maintained a deep respect for others in his profession, and remained a showman and a gentleman to the end.