A Doddy Fizz For The Doc 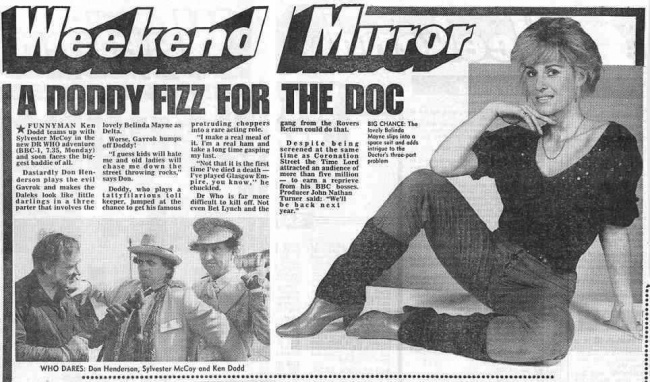 FUNNYMAN Ken Dodd teams up with Sylvester McCoy in the new DR WHO adventure (BBC-1, 7.35, Monday) and soon faces the biggest baddie of all.

Dastardly Don Henderson plays the evil Gavrok and makes the Daleks look like little darlings in a three parter that involves the lovely Belinda Mayne as Delta.

"I guess kids will hate me and old ladies will chase me down the street throwing rocks," says Don.

Doddy, who plays a tattyfilarious toll keeper, jumped at the chance to get his famous protruding choppers into a rare acting role.

"I make a real meal of it. I'm a real ham and take a long time gasping my last.

"Not that it is the first time I've died a death — I've played Glasgow Empire, you know," be chuckled,

Dr Who is far more difficult to kill oft. Not even Bet Lynch and gang from the Rovers Return could do that.

Despite being screened at the same time as Coronation Street the Time Lord attracted an audience of more than five million — to earn a reprieve front his BBC bosses. Producer John Nathan Turner said: "We'll be back next year."

Caption: BIG CHANCE: The lovely Belinda Mayne slips into a space suit and adds intrigue to the Doctor's three-part problem.