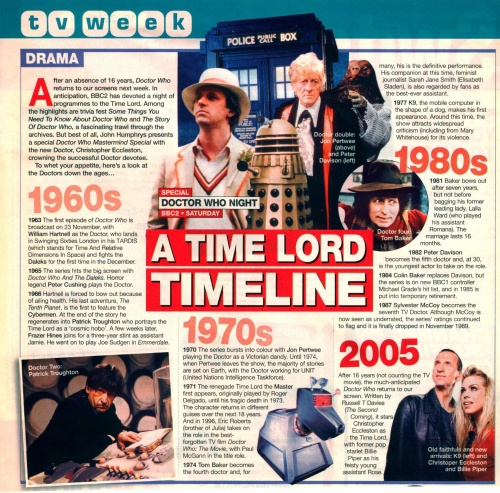 After an absence of 16 years, Doctor Who returns to our screens next week. In anticipation, BBC2 has devoted a night of programmes to the Time Lord. Among the highlights are trivia fest Some Things You Need To Know About Doctor Who and The Story Of Doctor Who, a fascinating trawl through the archives. But best of all, John Humphrys presents a special Doctor Who Mastermind Special with the new Doctor, Christopher Eccleston, crowning the successful Doctor devotee.

To whet your appetite, here's a look at the Doctors down the ages...

1963 The first episode of Doctor Who is broadcast on 23 November, with William Hartnell as the Doctor, who lands in Swinging Sixties London in his TARDIS (which stands for Time And Relative Dimensions In Space) and fights the Daleks for the first time in the December.

1965 The series hits the big screen with Doctor Who And The Daleks. Horror legend Peter Cushing plays the Doctor.

1966 Hartnell is forced to bow out because of ailing health. His last adventure, The Tenth Planet, is the first to feature the Cybermen. At the end of the story he regenerates into Patrick Troughton who portrays the Time Lord as a 'cosmic hobo'. A few weeks later, Frazer Hines joins for a three-year stint as assistant Jamie. He went on to play Joe Sudgen in Emmerdale.

1970 The series bursts into colour with Jon Pertwee playing the Doctor as a Victorian dandy. Until 1974, when Pertwee leaves the show, the majority of stories are set on Earth, with the Doctor working for UNIT (United Nations Intelligence Taskforce).

1971 The renegade Time Lord the Master first appears, originally played by Roger Delgado, until his tragic death in 1973. The character returns in different guises over the next 18 years. And in 1996, Eric Roberts (brother of Julia) takes on the role in the best-forgotten TV film Doctor Who: The Movie, with Paul McGann in the title role.

1974 Tom Baker becomes the fourth doctor and, for many, his is the definitive performance. His companion at this time, feminist journalist Sarah Jane Smith (Elisabeth Sladen), is also regarded by fans as the best-ever assistant.

1977 K9, the mobile computer in the shape of a dog, makes his first appearance. Around this time, the show attracts widespread criticism (including from Mary Whitehouse) for its violence.

1981 Baker bows out after seven years, but not before bagging his former leading lady, Lalla Ward (who played his assistant Romana). The marriage lasts 16 months.

1982 Peter Davison becomes the fifth doctor and, at 30, is the youngest actor to take on the role.

1984 Colin Baker replaces Davison, but the series is on new BBC1 controller Michael Grade's hit list, and in 1985 is put into temporary retirement.

1987 Sylvester McCoy becomes the seventh TV Doctor. Although McCoy is as underrated, the series' ratings continued to flag and it is finally dropped in November 1989.

2005 After 16 years (not counting the TV movie), the much-anticipated Doctor Who returns to our screen. Written by Russell T Davies (The Second Coming), it stars Christopher Eccleston as the Time Lord, with former pop starlet Billie Piper as his feisty young assistant Rose.