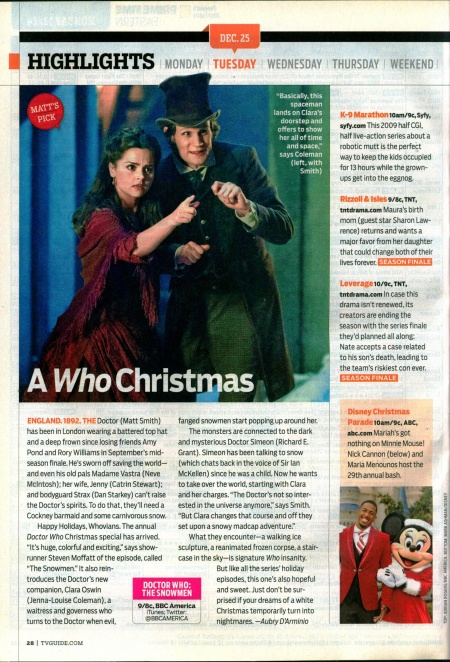 ENGLAND 1892. The Doctor (Matt Smith) has been in London wearing a battered top hat and a deep frown since losing friends Amy Pond and Rory Williams in September's mid-season finale. He's sworn off saving the world—and even his old pals Madame Vastra (Neve McIntosh); her wife, Jenny (Catrin Stewart); and bodyguard Strax (Dan Starkey) can't raise the Doctor's spirits. To do that, they'll need a Cockney barmaid and some carnivorous snow.

Happy Holidays, Whovians. The annual Doctor Who Christmas special has arrived. "It's huge, colorful and exciting," says show-runner Steven Moffatt of the episode, called "The Snowmen." It also reintroduces the Doctor's new companion, Clara Oswin (Jenna-Louise Coleman), a waitress and governess who turns to the Doctor when evil, fanged snowmen start popping up around her.

The monsters are connected to the dark and mysterious Doctor Simeon (Richard E. Grant). Simeon has been talking to snow (which chats back in the voice of Sir Ian McKellen) since he was a child. Now he wants to take over the world, starting with Clara and her charges. "The Doctor's not so interested in the universe anymore," says Smith. "But Clara changes that course and off they set upon a snowy madcap adventure."

What they encounter—a walking ice sculpture, a reanimated frozen corpse, a staircase in the sky—is signature Who insanity. But like all the series' holiday episodes, this one's also hopeful and sweet. Just don't be surprised if your dreams of a white Christmas temporarily turn into nightmares.

Caption: "Basically, this spaceman lands on Clara's doorstep and offers to show her all of time and space," says Coleman (left, with Smith)

K-9 Marathon 10am/9c, Syfy, syfy.com This 2009 half CGI, half live-action series about a robotic mutt is the perfect way to keep the kids occupied for 13 hours while the grownups get into the eggnog.