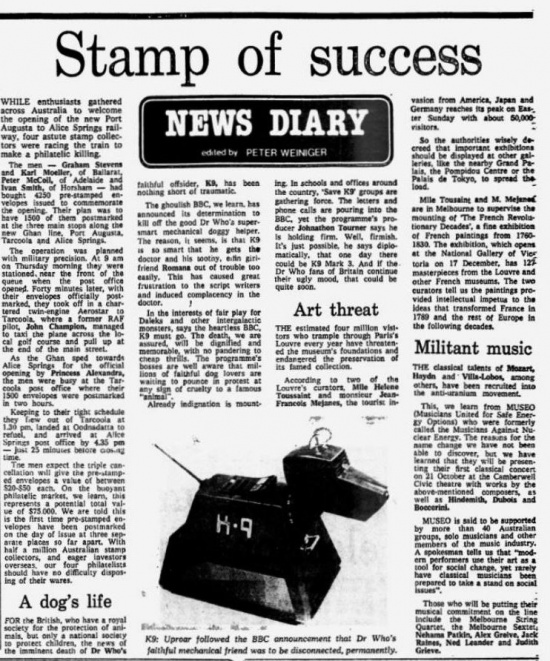 FOR the British, who have a royal society for the protection of animals, but only a national society protect children, the real of the imminent death of Dr Who's faithful offsider, K9, has been nothing short of traumatic.

The ghoulish BBC, we learn, has announced its determination to kill off the good Dr Who's super-smart mechanical doggy helper. The reason, it seems, is that K9 is so smart that he gets the doctor and his toothy, elfin friend Romana out of trouble too easily. This has caused great frustration to the script writers and induced complacency in the doctor.

In the interests of fair play for Daleks and other intergalactic monsters, says the heartless BBC, K9 must go. The death, we are assured, will be dignified and memorable, with no pandering to cheap thrills. The programmes bosses are well aware that mil. lions of faithful dog lovers are nailing to pounce in protest at any sign of cruelty to a famous

Already indignation is mounting. In schools and offices around the country, 'Save K9' groups are gathering force. The letters and phone calls are pouring into the BBC, yet the programme's producer Johnathon Tourner says he is holding firm. Well, firmish. It's just possible, he says diplomatically, that one day there could be K9 Mark 3. And if the Dr Who fans of Britain continue their ugly mood.

Caption: K9: Uproar followed the BBC announcement that Dr Who's faithful mechanical friend was to be disconnected, permanently.