A dream come true for Doctor Who 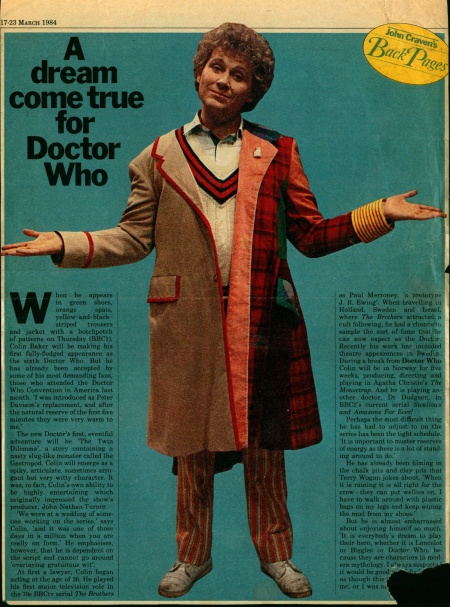 When he appears in green shoes, orange spats, yellow-and-black-striped trousers and jacket with a hotchpotch of patterns on Thursday (BBC1), Colin Baker will be making his first fully-fledged appearance as the sixth Doctor Who. But he has already been accepted by some of his most demanding fans, those who attended the Doctor Who Convention in America last month. 'I was introduced as Peter Davison's replacement, and after the natural reserve of the first five minutes they were very warm to me.'

The new Doctor's first, eventful venture will be 'The Twin Dilemma', a story containing a sty slug-like monster called the Gastropod. Colin will emerge as a spiky, articulate, sometimes arrogant but very witty character. It was, in fact, Colin's own ability to be highly entertaining which originally impressed the show's producer, John Nathan-Turner. 'We were at a wedding of someone working on the series,' says Colin, 'and it was one of those days in a million when you are really on form.' He emphasises, however, that he is dependent on the script and cannot go around 'overlaying gratuitous wit'.

At first a lawyer, Colin began ting at the age of 26. He played is first major television role in the 70s BBCtv serial The Brothers as Paul Merroney, 'a prototype J. R. Ewing'. When travelling in Holland, Sweden and Israel, where The Brothers attracted a cult following, he had a chance to sample the sort of fame that he can now expect as the Doctor. Recently his work has included theatre appearances in Sweden. During a break from Doctor Who Colin will be in Norway for five weeks, producing, directing an playing in Agatha Christie's The Mousetrap. And he is playing another doctor, Dr Dudgeon, in BBC2's current serial Swallows and Amazons For Ever!

Perhaps the most difficult thing he has had to adjust to on the series has been the tight schedule: 'It is important to muster reserves of energy as there is a lot of standing around to do.'

He has already been filming in the chalk pits and clay pits that Terry Wogan jokes about. 'When it is raining it is all right for the crew - they can put wellies on. I have to walk around with plastic bags on my legs and keep wiping the mud from my shoes.'

But he is almost embarrassed about enjoying himself so much. 'It is everybody's dream to play their hero, whether it is Lancelot or Biggles or Doctor Who, because they are characters in modern mythology. I always suspect it would be good ...