A golden celebration of 'Dr. Who' 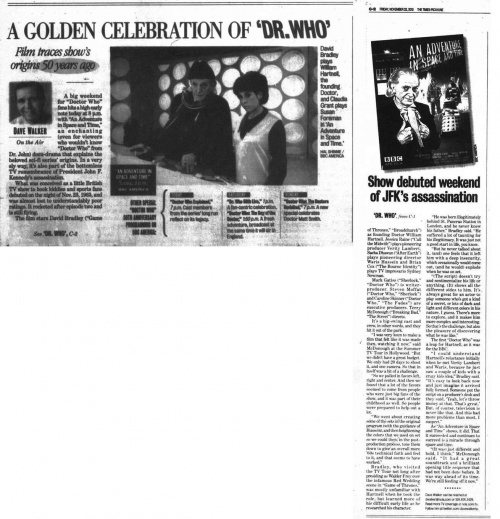 A golden celebration of 'Dr. Who' - Film traces show's origins 50 years ago

A big weekend for "Doctor Who" fans hits a high early note today at 8 p.m. with "An Adventure in Space and Time," an enchanting (even for viewers who wouldn't know "Doctor Who" from Dr. John) docudrama that explains the beloved sci-fi series' origins. In a very sly way, it's also part of the bottomless TV remembrance of President John F. Kennedy's assassination.

What was conceived as a little British TV show to hook kiddies and sports fans debuted on the night of Nov. 23, 1963, and was almost lost to understandably poor ratings. It rocketed after episode two and is still flying.

It's a big-swing cast and crew, in other words, and they hit it out of the park.

"I was very keen to make a film that felt like it was made then, watching it now," said McDonough at the Summer TV Tour in Hollywood. "But we didn't have a great budget. We only had 20 days to shoot it, and one camera. So that in itself was a bit of a challenge.

"So we pulled in favors left, right and center. And then we found that a lot of the favors seemed to come from people who were just big fans of the show, and it was part of their childhood as well. So people were prepared to help out a lot.

"We went about creating some of the sets in the original program (with the guidance of Hussein), and then heightening the colors that we used on set so we could then, in the post-production process, tone them down to give an overall more '60s technical faith and feel to it, and that seems to have worked."

Bradley, who visited the TV Tour not long after presiding as Walder Frey over the infamous Red Wedding scene in "Game of Thrones," was mostly unfamiliar with Hartnell when he took the role, but learned more of his difficult early life as he researched his character.

"He was born illegitimately behind St. Pancras Station in London, and he never knew his father," Bradley said. "He suffered a lot of taunting for his illegitimacy. It was just not a good start in life, you know.

"But he never talked about it, (and) one feels that it left him with a deep insecurity, which occasionally would come out, (and he would) explode when he was on set.

"(The script) doesn't try and sentimentalize his life or anything. (It) shows all the different sides to him. It's always great for an actor to play someone who's got a kind of a secret, or lots of dark and light and different colors in his nature, I guess. There's more to explore, and it makes him more complex and interesting. So that's the challenge, but also the pleasure of discovering what he was like."

The first "Doctor Who" was a leap for Hartnell, as it was for the BBC.

"I could understand Hartnell's reluctance initially when he met Verity Lambert and Waris, because he just saw a couple of kids with a crazy kids idea," Bradley said. "It's easy to look back now and just imagine it arrived fully formed. Someone put the script on a producer's desk and they said, 'Yeah, let's throw money at that. That's great.' But, of course, television is never like that. And this had more problems than most, I suspect."

As "An Adventure in Space and Time" shows, it did. That it succeeded and continues to succeed is a miracle through space and time.

"(It was) just different and bold, I think," McDonough said. "It had a great soundtrack and a brilliant opening title sequence that had not been done before. It was way ahead of its time. We're still feeding off it now."

Dave Walker can be reached at dwalker@nola.com or 504.826.3429. Read more TV coverage at nola.com/tv. Follow him at twitter.com/davewalkertp.

"An Adventure in Space and Time"

Other special "Doctor Who" 50th anniversary programming on BBC America:

"Doctor Who Explained," 7 p.m. Cast members from the series' long run reflect on its legacy.

"Doctor Who: The Day of the Doctor," 1:50 p.m. A fresh adventure, broadcast at the same time it will air in England.