A history of Britain in 48 stamps 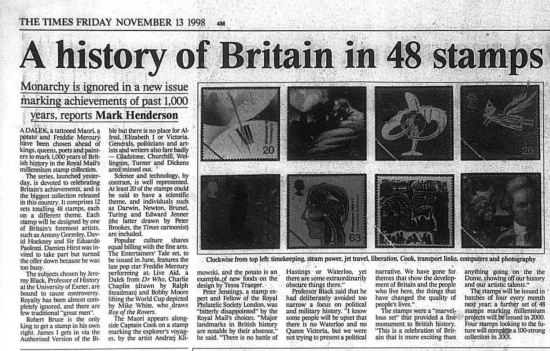 Monarchy is ignored in a new issue marking achievements of past 1,000 years, reports Mark Henderson

A DALEK, a tattooed Maori, a potato and Freddie Mercury have been chosen ahead of kings, queens, poets and painters to mark 1,000 years of British history in the Royal Mail's millennium stamp collection.

The series, launched yesterday, is devoted to celebrating Britain's achievements, and is the biggest collection released in this country. It comprises 12 sets totalling 48 stamps, each on a different theme. Each stamp will be designed by one of Britain's foremost artists, such as Antony Gormley, David Hockney and Sir Eduardo Paolozzi. Damien Hirst was invited to take part but turned the offer down because he was too busy.

The subjects chosen by Jeremy Black, Professor of History at the University of Exeter, are bound to cause controversy. Royalty has been almost completely ignored, and there are few traditional "great men".

Robert Bruce is the only king to get a stamp in his own right. James I gets in via the Authorised Version of the Bible but there is no place for Alfred, Elizabeth I or Victoria. Generals, politicians and artists and writers also fare badly - Gladstone, Churchill, Wellington, Turner and Dickens are missed out.

Science and technology, by contrast, is well represented. At least 20 of the stamps could be said to have a scientific theme, and individuals such as Darwin, Newton, Brunel, Turing and Edward Jenner (the latter drawn by Peter Brookes, the Times cartoonist) are included.

Popular culture shares equal billing with the fine arts. The Entertainers' Tale set, to be issued in June, features the late pop star Freddie Mercury performing at Live Aid, a Dalek from Dr Who, Charlie Chaplin (drawn by Ralph Steadman) and Bobby Moore lifting the World Cup depicted by Mike White, who draws Roy of the Rovers.

The Maori appears alongside Captain Cook on a stamp marking the explorer's voyages, by the artist Andrzej Klimowski, and the potato is an example of new foods on the design by Tessa Traeger.

Peter Jennings, a stamp expert and Fellow of the Royal Philatelic Society London, was "bitterly disappointed" by the Royal Mail's choices. "Major landmarks in British history are notable by their absence," he said. "There is no battle of Hastings or Waterloo, yet there are some extraordinarily obscure things there."

Professor Black said that he had deliberately avoided too narrow a focus on political and military history. "I know some people will be upset that there is no Waterloo and no Queen Victoria, but we were not trying to present a political narrative. We have gone for themes that show the development of Britain and the people who live here, the things that have changed the quality of people's lives."

The stamps were a "marvellous set" that provided a fine monument to British history. "This is a celebration of Britain that is more exciting than anything going on the the Dome, showing off our history and our artistic talents."