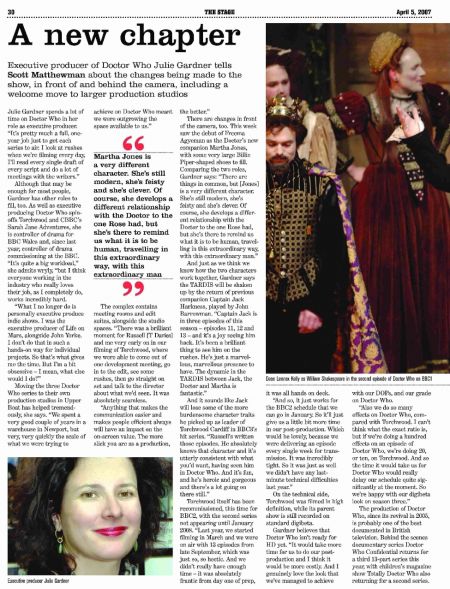 Executive producer of Doctor Who Julie Gardner tells Scott Matthewman about the changes being made to the show, in front of and behind the camera, including a welcome move to larger production studios

Julie Gardner spends a lot of time on Doctor Who in her role as executive producer. "It's pretty much a full, one-year job just to get each series to air. I look at rushes when we're filming every day, I'll read every single draft of every script and do a lot of meetings with the writers."

Although that may be enough for most people, Gardner has other roles to fill, too. As well as executive producing Doctor Who spinoffs Torchwood and CBBC's Sarah Jane Adventures, she is controller of drama for BBC Wales and, since last year, controller of drama commissioning at the BBC. "It's quite a big workload," she admits wryly, but I think everyone working in the industry who really loves their job, as I completely do, works incredibly hard.

"What I no longer do is personally executive produce indie shows. I was the executive producer of Life on Mars, alongside John Yorke. I don't do that in such a hands-on way for individual projects. So that's what gives me the time. But I'm a bit obsessive — I mean, what else would I do?"

Moving the three Doctor Who series to their own production studios in Upper Boat has helped tremendously, she says. "We spent a very good couple of years in a warehouse in Newport, but very, very quickly the scale of what we were trying to achieve on Doctor Who meant we were outgrowing the space available to us."

Martha Jones is a very different character. She's still modern, she's feisty and she's clever. Of course, she develops a different relationship with the Doctor to the one Rose had, but she's there to remind us what it is to be human, travelling in this extraordinary way, with this extraordinary man

The complex contains meeting rooms and edit suites, alongside the studio spaces. "There was a brilliant moment for Russell [T Davies] and me very early on in our filming of Torchwood, where we were able to come out of one development meeting, go in to the edit, see some rushes, then go straight on set and talk to the director about what we'd seen. It was absolutely seamless.

"Anything that makes the communication easier and makes people efficient always will have an impact on the on-screen value. The more slick you are as a production, the better"

There are changes in front of the camera, too. This week saw the debut of Freema Agyeman as the Doctor's new companion Martha Jones, with some very large Billie Piper-shaped shoes to fill. Comparing the two roles, Gardner says: "There are things in common, but [Jones] is a very different character. She's still modern, she's feisty and she's clever. Of course, she develops a different relationship with the Doctor to the one Rose had, but she's there to remind us what it is to be human, travelling in this extraordinary way, with this extraordinary man."

And just as we think we know how the two characters work together, Gardner says the TARDIS will be shaken up by the return of previous companion Captain Jack Harkness, played by John Barrowman. "Captain Jack is in three episodes of this season — episodes 11, 12 and 13 — and it's a joy seeing him back. It's been a brilliant thing to see him on the rushes. He's just a marvellous, marvellous presence to have. The dynamic in the TARDIS between Jack, the Doctor and Martha is fantastic."

And it sounds like Jack will lose some of the more burdensome character traits he picked up as leader of Torchwood Cardiff in BBC3's hit series. "Russell's written those episodes. He absolutely knows that character and its utterly consistent with what you'd want, having seen him in Doctor Who. And it's fun, and he's heroic and gorgeous and there's a lot going on there still."

Torchwood itself has been recommissioned, this time for BBC2, with the second series not appearing until January 2008. "Last year, we started filming in March and we were on air with 13 episodes from late September, which was just so, so hectic. And we didn't really have enough time — it was absolutely frantic from day one of prep,

it was all hands on deck.

"And so, it just works for the BBC2 schedule that we can go in January. So it'll just give us a little bit more time in our post-production. Which would be lovely, because we were delivering an episode every single week for transmission. It was incredibly tight. So it was just as well we didn't have any last-minute technical difficulties last year"

On the technical side, Torchwood was filmed in high definition, while its parent show is still recorded on standard digibeta.

Gardner believes that Doctor Who isn't ready for HD yet. "It would take more time for us to do our post-production and I think it would be more costly. And I genuinely love the look that we've managed to achieve with our DOPs, and our grade on Doctor Who.

'Also we do so many effects on Doctor Who, compared with Torchwood. I can't think what the exact ratio is, but if were doing a hundred effects on an episode of Doctor Who, we're doing 20, or ten, on Torchwood. And so the time it would take us for Doctor Who would really delay our schedule quite significantly at the moment. So were happy with our digibeta look on season three.'

The production of Doctor Who, since its revival in 2005, is probably one of the best documented in British television. Behind the scenes documentary series Doctor Who Confidential returns for a third 13-part series this year, with children's magazine show Totally Doctor Who also returning for a second series.

Caption: Dean Lennox Kelly as William Shakespeare in the second episode of Doctor Who on BBC1