A spin through time means regeneration for the tweed jacket 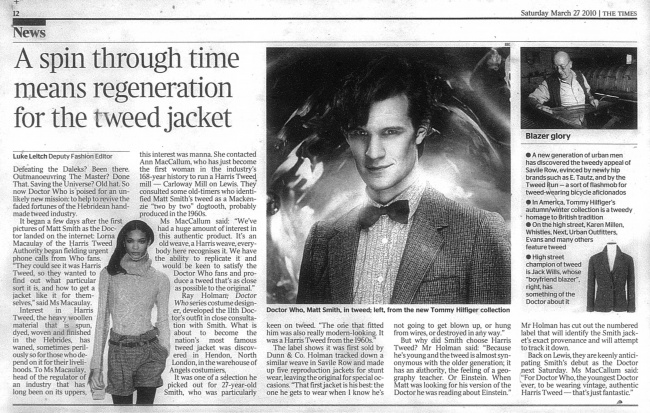 Defeating the Daleks? Been there. Outmanoeuvring The Master? Done That. Saving the Universe? Old hat. So now Doctor Who is poised for an unlikely new mission: to help to revive the faded fortunes of the Hebridean handmade tweed industry.

It began a few days after the first pictures of Matt Smith as the Doctor landed on the internet Lorna Macaulay of the Harris Tweed Authority began fielding urgent phone calls from Who fans. "They could see it was Harris Tweed, so they wanted to find out what particular sort it is, and how to get a jacket like it for themselves," said Ms Macaulay. Interest in Harris Tweed, the heavy woollen material that is spun, dyed, woven and finished in the Hebrides, has

waned, sometimes perilously so for those who depend on it for their livelihoods. To Ms Macaulay, head of the regulator of an industry that has long been on its uppers, this interest was manna. She contacted Ann MacCallum, who has just become the first woman in the industry's 168-year history to run a Harris Tweed mill — Carloway Mill on Lewis. They consulted some old-timers who identified Matt Smith's tweed as a Mackenzie "two by two" dogtooth, probably produced in the 1960s.

Ms MacCallum said: "We've had a huge amount of interest in this authentic product. It's an old weave, a Harris weave, everybody here recognises it. We have the ability to replicate it and would be keen to satisfy the

Doctor Who fans and produce a tweed that's as dose as possible to the original."

Ray Holman; Doctor Who series costume designer, developed the 11th Doctor's outfit in close consultation with Smith. What is about to become the nation's most famous tweed jacket was discovered in Hendon, North London, in the warehouse of Angels costumiers.

It was one of a selection he picked out for 27-year-old Smith, who was particularly keen on tweed. "The orie that fitted him was also really modern-looking. It was a Harris Tweed from the 1960s." The label shows it was first sold by Dunn & Co. Holman tracked down a similar weave in Savile Row and made up five reproduction jackets for stunt wear, leaving the original for special occasions. "That first jacket is his best the one he gets to wear when I know he's not going to get blown up, or hung from wires, or destroyed in any way."

But why did Smith choose Harris Tweed? Mr Holman said: "Because he's young and the tweed is almost synonymous with the older generation; it has an authority, the feeling of a geography teacher. Or Einstein. When Matt was looking for his version of the Doctor he was reading about Einstein." Mr Holman has cut out the numbered label that will identify the Smith jacket's exact provenance and will attempt to track it down.

Back on Lewis, they are keenly anticipating Smith's debut as the Doctor next Saturday. Ms MacCallum said: "For Doctor Who, the youngest Doctor ever, to be wearing vintage, authentic Harris Tweed — that's just fantastic."

• A new generation of urban men has discovered the tweedy appeal of Savile Row, evinced by newly hip brands such as E. Tautz, and by the Tweed Run — a sort of flashmob for tweed-wearing bicycle aficionados

• In America, Tommy Hilfiger's autumn/winter collection is a tweedy homage to British tradition

• On the high street, Karen Millen, Whistles, Next Urban Outfitters, Evans and many others feature tweed

• High street champion of tweed is Jack Wills, whose "boyfriend blazer", right, has something of the Doctor about it