A tale of a Time Lord 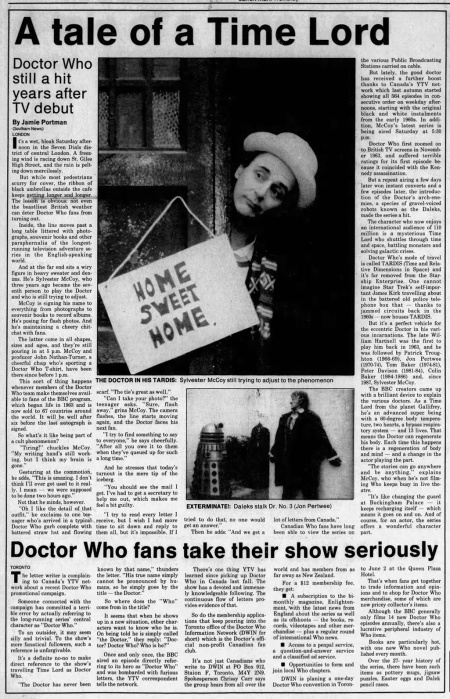 Doctor Who still a hit years after TV debut

It's a wet, bleak Saturday afternoon in the Seven Dials district of central London. A freezing wind is racing down St. Giles High Street, and the rain is pelting down mercilessly.

But while most pedestrians scurry for cover, the ribbon of black umbrellas outside the cafe keeps getting longer and longer. The lesson is obvious: not even the beastliest British weather can deter Doctor Who fans from turning out.

Inside, the line moves past a long table littered with photographs, souvenir books and other paraphernalia of the longest-running television adventure series in the English-speaking world.

And at the far end sits a wiry figure in heavy sweater and denims. He's Sylvester McCoy, who three years ago became the seventh person to play the Doctor and who is still trying to adjust.

McCoy is signing his name to everything from photographs to souvenir books to record albums. He's posing for flash photos. And he's maintaining a cheery chitchat with fans.

The latter come in all shapes, sizes and ages, and they're still pouring in at 5 p.m. McCoy and producer John Nathan-Turner, a cheerful chap who's sporting a Doctor Who T-shirt, have been there since before 1 p.m.

This sort of thing happens whenever members of the Doctor Who team make themselves available to fans of the BBC program, which began life in 1963 and is now sold to 67 countries around the world. It will be well after six before the last autograph is signed.

So what's it like being part of a cult phenomenon?

"Tiring?" chuckles McCoy. "My writing hand's still working, but I think my brain is gone."

Gesturing at the commotiofi, he adds, "This is amazing. I don't think I'll ever get used to it really. I mean — we were supposed to be done two hours ago."

"Oh I like the detail of, that outfit," he exclaims to one teenager who's arrived in a typical,. Doctor Who garb complete with battered straw hat and flowing scarf. "The tie's great as well."

"Can I take your photo?" the teenager asks. "Sure, flash away," grins McCoy. The camera flashes, the line starts moving again, and the Doctor faces his next fan.

"I try to find something to say to everyone," he says cheerfully. "After all you owe it to them when they've queued up for such a long time."

And he stresses that today's turnout is the mere tip of the iceberg.

"You should see the mail I get. I've had to get a secretary to help me out, which makes me feel a bit guilty.

"I try to read every letter I receive, but I wish I had more time to sit down and reply to them all, but it's impossible. If I tried to do that, no one would get an answer."

Then he adds: "And we get a lot of letters from Canada." Canadian Who fans have long been able to view the series on the various Public Broadcasting Stations carried on cable.

But lately, the good doctor has received a further boost thanks to Canada's YTV network which last autumn started showing all 564 episodes in consecutive order on weekday afternoons, starting with the original black and white instalments from the early 1960s. In addition, McCoy's latest series is being aired Saturday at 5:30 p.m.

Doctor Who first zoomed on to British TV screens in November 1963, and suffered terrible ratings for its first episode because it coincided with the Kennedy assassination.

But a repeat airing a few days later won instant converts and a few episodes later, the introduction of the Doctor's arch-enemies, a species of gravel-voiced robots known as the Daleks, made the series a hit.

Doctor Who's mode of travel is called TARDIS (Time and Relative Dimensions in Space) and it's far removed from the Starship Enterprise. One cannot imagine Star Trek's self-important James Kirk travelling about in the battered old police telephone box that — thanks to jammed circuits back in the 1960s — now houses TARDIS.

The BBC creators came up with a brilliant device to explain the various doctors. As a Time Lord from the planet Gallifrey, he's an advanced super being with a 60-degree body temperature, two hearts, a bypass respiratory system — and 13 lives. That means the Doctor can regenerate his body. Each time this happens there is a regeneration of body and mind — and a change in the actor playing the part.

"The stories can go anywhere and be anything," explains McCoy, who when he's not filming Who keeps busy in live theatre.

"It's like changing the guard at Buckingham Palace — it keeps recharging itself — which means it goes on and on. And of course, for an actor, the series offers a wonderful character part.

Caption: THE DOCTOR IN HIS TARDIS: Sylvester McCoy still trying to adjust to the phenomenon

The letter writer is complaining to Canada's YTV network about a recent Doctor Who promotional campaign.

It's a definite no-no to make direct reference to the show's travelling Time Lord as Doctor Who.

"The Doctor has never been known by that name," thunders the letter. "His true name simply cannot be pronounced by humans, so he simply goes by the title — the Doctor."

So where does the "Who" come from in the title?

It seems that when he shows up in a new situation, other characters want to know who he is. On being told he is simply called "the Doctor," they reply: "Doctor? Doctor Who? Who is he?"

Once and only once, the BBC aired an episode directly referring to its hero as "Doctor Who" and was bombarded with furious letters, the YTV correspondent tells the network.

There's one thing YTV has learned since picking up Doctor Who in Canada last fall. The show has a devoted and immensely knowledgeable following. The continuous flow of letters provides evidence of that.

So do the membership applications that keep pouring into the Toronto office of the Doctor Who Information Network (DWIN for short) which is the Doctor's official non-profit Canadian fan club.

It's not just Canadians who write to DWIN at PO Box 912, Staion F, Toronto, M4 Y 2N9. Spokesperson Chrissy Carr says the group hears from all over the world and has members from as far away as New Zealand.

■ A subscription to the bimonthly magazine, Enlightenment, with the latest news from England about the series as well as its offshoots — the books, records, videotapes and other merchandise — plus a regular round of international Who news.

■ Access to a penpal service, a question-and-answer service and a classified ad service.

■ Opportunities to form and join local Who chapters.

DWIN is planing a one-day Doctor Who convention in Toron to June 2 at the Queen Plaza Hotel.

That's when fans get together to trade information and opinions and to shop for Doctor Who merchandise, some of which are now pricey collector's items.

Although the BBC generally only films 14 new Doctor Who episodes annually, there's also a lucrative peripheral industry of Who items.

Books are particularly hot, with one new Who novel pub lished every month.

Over the 27- year history of the series, there have been such items as pottery mugs, jigsaw puzzles, Easter eggs and Dalek pencil cases.