A trip through time 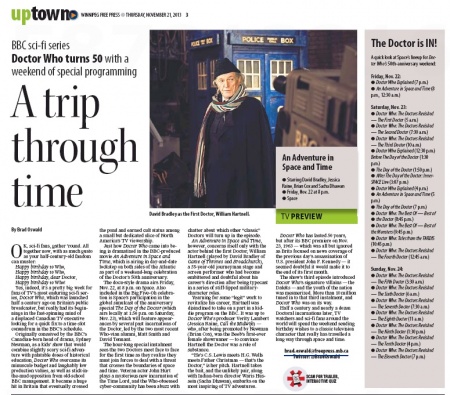 Originally conceived by the BBC's Canadian-born head of drama, Sydney Newman, as a kids' show that would combine slightly scary sci-fi adventure with palatable doses of historical education, Doctor Who overcame its minuscule budget and laughably low production values, as well as stick-inthe-mud opposition from old-school BBC management. It became a huge hit in Britain that eventually crossed the pond and earned cult status among a small but dedicated slice of North America's TV viewership.

Just how Doctor Who came into being is dramatized in the BBC-produced movie An Adventure in Space and Time, which is airing in day-and-date lockstep on both sides of the Atlantic as part of a weekend-long celebration of the Doctor's 50th anniversary.

The docu-style drama airs Friday, Nov. 22, at 8 p.m. on Space. Also included in the Big Five-Oh celebration is Space's participation in the global simulcast of the anniversary special The Day of the Doctor (which airs locally at 1:50 p.m. on Saturday, Nov. 23), which will feature appearances by several past incarnations of the Doctor, led by the two most recent Who-vian alumni, Matt Smith and David Tennant.

The hour-long special instalment sees the two Doctors meet face to face for the first time as they realize they must join forces to deal with a threat that crosses the boundaries of space and time. Veteran actor John Hurt plays a mysterious new incarnation of the Time Lord, and the Who-obsessed cyber-community has been abuzz with chatter about which other "classic" Doctors will turn up in the episode.

An Adventure in Space and Time, however, concerns itself only with the actor behind the first Doctor, William Hartnell (played by David Bradley of Game of Thrones and Broadchurch), a 55-year-old journeyman stage and screen performer who had become embittered and doubtful about his career's direction after being typecast in a series of stiff-lipped militarycharacter roles.

Yearning for some "legit" work to revitalize his career, Hartnell was disinclined to take on a part in a kiddie program on the BBC. It was up to Doctor Who's producer Verity Lambert (Jessica Raine, Call the Midwife) — who, after being promoted by Newman (Brian Cox), was the Beeb's first-ever female showrunner — to convince Hartnell the Doctor was a role of substance.

"He's C.S. Lewis meets H.G. Wells meets Father Christmas — that's the Doctor," is her pitch. Hartnell takes the bait, and the unlikely pair, along with Indian-born director Waris Hussein (Sacha Dhawan), embarks on the most inspiring of TV adventures.

Doctor Who has lasted 50 years, but after its BBC premiere on Nov. 23, 1963 — which was all but ignored as Brits focused on news coverage of the previous day's assassination of U.S. president John F. Kennedy — it seemed doubtful it would make it to the end of its first month.

The show's third episode introduced Doctor Who's signature villains — the Daleks — and the youth of the nation was mesmerized. More than 10 million tuned in to that third instalment, and Doctor Who was on its way.

Half a century and nearly a dozen Doctoral incarnations later, TV watchers and sci-fi fans around the world will spend the weekend sending birthday wishes to a classic television character that really has travelled a long way through space and time.