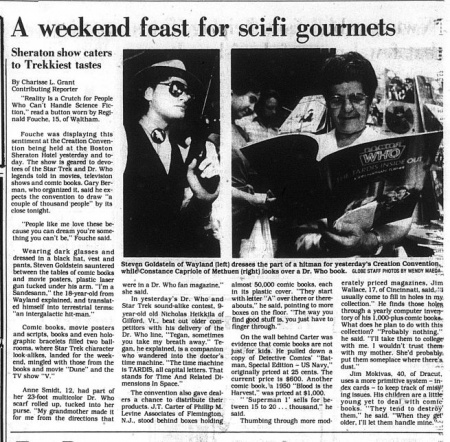 "Reality Is a Crutch for People Who Can't Handle Science Fiction," read a button worn by Reginald Fouche, 15, of Waltham.

Fouche was displaying this sentiment at the Creation Convention being held at the Boston Sheraton Hotel yesterday and today. The show is geared to devotees of the Star Trek and Dr. Who legends told in movies, television shows and comic books. Gary Berman, who organized it, said he expects the convention to draw "a couple of thousand people" by its close tonight.

"People like me love these because you can dream you're something you can't be," Fouche said.

Wearing dark glasses and dressed in a black hat, vest and pants, Steven Goldstein sauntered between the tables of comic books and movie posters, plastic laser gun tucked under his arm. "I'm a Sandesann," the 18-year-old from Wayland explained, and translated himself into terrestrial terms: "an intergalactic hit-man."

Comic books, movie posters and scripts, books and even holographic bracelets filled two ballrooms, where Star Trek character look-alikes, landed for the weekend, mingled with those from the books and movie "Dune" and the TV show "V."

Anne Smidt, 12, had part of her 23-foot multicolor Dr. Who scarf rolled up, tucked into her purse. "My grandmother made it for me from the directions that were in a Dr. Who fan magazine," she said.

In yesterday's Dr. Who and Star Trek sound-alike contest, 9-year-old old Nicholas Heikkila of Gilford, Vt., beat out older competitors with his delivery of the Dr. Who line, "Tegan, sometimes you take my breath away." Tegan, he explained, is a companion who wandered into the doctor's time machine. "The time machine is TARDIS, all capital letters. That stands for Time And Related Dimensions In Space."

The convention also gave dealers a chance to distribute their products. J.T. Carter of Phillip M. Levine Associates of Flemington, N.J., stood behind boxes holding almost 50,000 comic books, each in its plastic cover. "They start with letter "A" over there or thereabouts," he said, pointing to more boxes on the floor. "The way you find good stuff is, you just have to finger through."

On the wall behind Carter was evidence that comic books are not just for kids. He pulled down a copy of Detective Comics' "Batman, Special Edition - US Navy," originally priced at 25 cents. The current price is $600. Another comic book, a 1950 "Blood is the Harvest," was priced at $1,000.

Thumbing through more moderately priced magazines, Jim Wallace, 17, of Cincinnati, said, "I usually come to fill in holes in my collection." He finds those holes through a yearly computer inventory of his 1,000-plus comic books. What does he plan to do with this collection? "Probably nothing," he said. "I'll take them to college with me. I wouldn't trust them with my mother. She'd probably put them someplace where there's dust."

Jim Mokivas, 40, of Dracut, uses a more primitive system - index cards - to keep track of missing issues. His children are a little young yet to deal with comic books. "They tend to destroy them," he said. "When they get older, I'll let them handle mine."