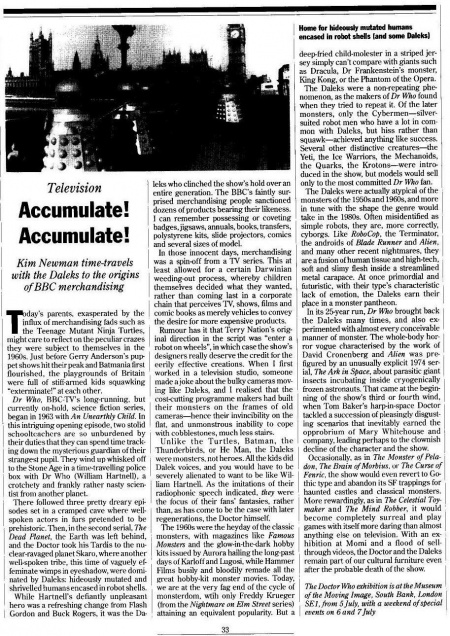 Today's parents, exasperated by the influx of merchandising fads such as he Teenage Mutant Ninja Turtles, might care to reflect on the peculiar crazes they were subject to themselves in the 1960s. Just before Gerry Anderson's puppet shows hit their peak and Batmania first flourished, the playgrounds of Britain were full of stiff-armed kids squawking "exterminate!" at each other.

Dr Who, BBC-TV's long-running, but currently on-hold. science fiction series, began in 1963 with An Unearthly Child. In this intriguing opening episode, two stolid schoolteachers are so unburdened by their duties that they can spend time tracking down the mysterious guardian of their strangest pupil. They wind up whisked off to the Stone Age in a time-travelling police box with Dr Who (William Hartnell), a crotchety and frankly rather nasty scientist from another planet.

There followed three pretty dreary episodes set in a cramped cave where well-spoken actors in furs pretended to be prehistoric. Then, in the second serial, The Dead Planet, the Earth was left behind, and the Doctor took his Tardis to the nuclear-ravaged planet Skaro, where another well-spoken tribe, this time of vaguely effeminate wimps in eyeshadow, were dominated by Daleks: hideously mutated and shrivelled humans encased in robot shells. While Hartnell's defiantly unpleasant hero was a refreshing change from Flash Gordon and Buck Rogers, it was the Daleks who clinched the show's hold over an entire generation. The BBC's faintly surprised merchandising people sanctioned dozens of products bearing their likeness. I can remember possessing or coveting badges, jigsaws, annuals, books, transfers, polystyrene kits, slide projectors, comics and several sizes of model.

In those innocent days, merchandising was a spin-off from a TV series. This at least allowed for a certain Darwinian weeding-out process, whereby children themselves decided what they wanted, rather than coming last in a corporate chain that perceives TV, shows, films and comic books as merely vehicles to convey the desire for more expensive products. Rumour has it that Terry Nation's original direction in the script was "enter a robot on wheels", in which case the show's designers really deserve the credit for the eerily effective creations. When I first worked in a television studio, someone made a joke about the bulky cameras moving like Daleks, and I realised that the cost-cutting programme makers had built their monsters on the frames of old cameras—hence their invincibility on the flat, and unmonstrous inability to cope with cobblestones, much less stairs.

Unlike the Turtles, Batman, the Thunderbirds, or He Man, the Daleks were monsters, not heroes. All the kids did Dalek voices, and you would have to be severely alienated to want to be like William Hartnell. As the imitations of their radiophonic speech indicated, they were the focus of their fans' fantasies, rather than, as has come to be the case with later regenerations, the Doctor himself.

The 1960s were the heyday of the classic monsters, with magazines like Famous Monsters and the glow-in-the-dark hobby kits issued by Aurora hailing the long-past days of Karloff and Lugosi, while Hammer Films busily and bloodily remade all the great hobby-kit monster movies. Today, we are at the very fag end of the cycle of monsterdom, wtih only Freddy Krueger (from the Nightmare on Elm Street series) attaining an equivalent popularity. But a deep-fried child-molester in a striped jersey simply can't compare with giants such as Dracula, Dr Frankenstein's monster, King Kong, or the Phantom of the Opera. The Daleks were a non-repeating phenomenon, as the makers of Dr Who found when they tried to repeat it. Of the later monsters, only the Cybermen—silversuited robot men who have a lot in common with Daleks, but hiss rather than squawk—achieved anything like success. Several other distinctive creatures—the Yeti, the Ice Warriors, the Mechanoids, the Quarks, the Krotons—were introduced in the show, but models would sell only to the most committed Dr Who fan. The Daleks were actually atypical of the monsters of the 1950sand 1960s, and more in tune with the shape the genre would take in the 1980s. Often misidentified as simple robots, they are, more correctly, cyborgs. Like RoboCop, the Terminator, the androids of Blade Runner and Alien, and many other recent nightmares, they area fusion of human tissue and high-tech, soft and slimy flesh inside a streamlined metal carapace. At once primordial and futuristic, with their type's characteristic lack of emotion, the Daleks earn their place in a monster pantheon.

In its 25-year run, Dr Who brought back the Daleks many times, and also experimented with almost every conceivable manner of monster. The whole-body horror vogue characterised by the work of David Cronenberg and Alien was prefigured by an unusually explicit 1974 serial, The Ark in Space, about parasitic giant insects incubating inside cryogenically frozen astronauts. That came at the beginning of the show's third or fourth wind, when Tom Baker's harp-in-space Doctor tackled a succession of pleasingly disgusting scenarios that inevitably earned the opprobrium of Mary Whitehouse and company, leading perhaps to the clownish decline of the character and the show. Occasionally, as in The Monster of Peladon, The Brain of Morbius, or The Curse of Fenric, the show would even revert to Gothic type and abandon its SF trappings for haunted castles and classical monsters. More rewardingly, as in The Celestial Toy-maker and The Mind Robber, it would become completely surreal and play games with itself more daring than almost anything else on television. With an exhibition at Monti and a flood of sell-through videos, the Doctor and the Daleks remain part of our cultural furniture even after the probable death of the show.

The Doctor Who exhibition is at the Museum of the Moving Image, South Bank, London SEl, from 5 July, with a weekend of special events on 6 and 7 July

Caption: Home for hideously mutated humans encased in robot shells (and some Daleks)