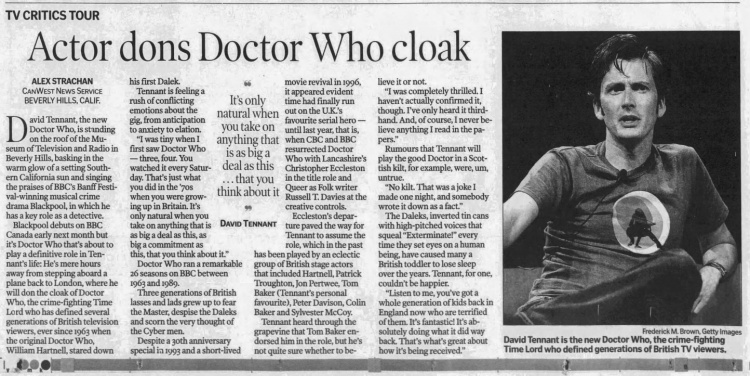 David Tennant, the new Doctor Who, is standing on the roof of the Museum of Television and Radio in Beverly Hills, basking in the warm glow of a setting Southern California sun and singing the praises of BBC's Banff Festival-winning musical crime drama Blackpool, in which he has a key role as a detective.

Blackpool debuts on BBC Canada early next month but it's Doctor Who that's about to play a definitive role in Tennant's life: He's mere hours away from stepping aboard a plane back to London, where he will don the cloak of Doctor Who, the crime-fighting Time Lord who has defined several generations of British television viewers, ever since 1963 when the original Doctor Who, William Hartnell, stared down his first Dalek

Tennant is feeling a rush of conflicting emotions about the gig, from anticipation to anxiety to elation.

"I was tiny when I first saw Doctor Who — three, four. You watched it every Saturday. That's just what you did in the 'dos when you were growing up in Britain. It's only natural when you take on anything that is as big a deal as this, as big a commitment as this, that you think about it.

Three generations of British lasses and lads grew up to fear the Master, despise the Daleks and scorn the very thought of the Cyber men.

Despite a 3oth anniversary special is 1993 and a short-lived movie revival in 1996, it appeared evident time had finally run out on the U.K.'s favourite serial hero —until last year, that is, when CBC and BBC resurrected Doctor Who with Lancashire's Christopher Eccleston in the title role and Queer as Folk writer Russell T. Davies at the creative controls.

Eccleston's departure paved the way for Tennant to assume the role, which in the past has been played by an eclectic group of British stage actors that included Hartnell, Patrick Troughton, Jon Pert-wee, Tom Baker (Tennant's personal favourite), Peter Davison, Colin Baker and Sylvester McCoy.

Tennant heard through the grapevine that Tom Baker endorsed him in the role, but he's not quite sure whether to believe it or not.

"I was completely thrilled. I haven't actually confirmed it, though. I've only heard it third-hand. And, of course, I never believe anything I read in the papers."

Rumours that Tennant will play the good Doctor in a Scottish kilt, for example, were, um, untrue.

"No kilt. That was a joke I made one night, and somebody wrote it down as a fact."

The Daleks, inverted tin cans with high-pitched voices that squeal "Exterminate!" every time they set eyes on a human being, have caused many a British toddler to lose sleep over the years. Tennant, for one, couldn't be happier.

"Listen to me, you've got a whole generation of kids back in England now who are terrified of them. It's fantastic! It's absolutely doing what it did way back That's what's great about how ifs being received:

Caption: David Tennant is the new Doctor Who, the crime-fighting Time Lord who defined generations of British TV viewers.