After those Daleks, more monsters on Saturday afternoon 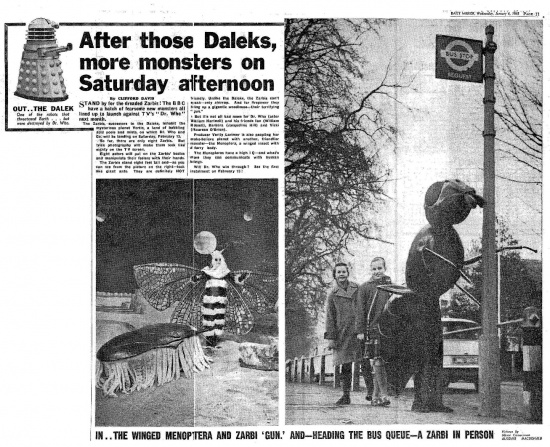 STAND by for the dreaded Zarbis! The B B C have a batch of fearsome new monsters all lined up to launch against TV's "Dr. Who" next month.

The Zarbis, successors to the Daleks, inhabit the mysterious planet Vortis, a land of bubbling acid pools and mists, on which Dr. Who and Co. will be landing on Saturday, February 13.

So far, there are only eight Zarbis. But trick photography Will make them look like eighty on the T V screen.

Eight actors will put on the Zarbis' bodies and manipulate their feelers with their hands.

The Zarbis stand eight feet tall and—as you can see from the picture on the right—look like giant ants. They are definitely NOT friendly. Unlike the Daleks, the Zarbis can't speak—only chirrup. And for firepower they bring up a gigantic woodlouse—their terrifying "gun."

But it's not all bad news for Dr. Who (actor William Hartnell) and his friends Ian (William Russell), Barbara (Jacqueline Hill) and Vicki Maureen O'Brien).

Producer Verity Lorimer is also peopling her make-believe planet with another, friendlier monster—the Menoptera, a winged insect with a furry body.

The Menopteras have a high I Q—and what's more they can communicate with human beings.

Will Dr. Who win through ? See the first instalment on February 13.

Caption: OUT.. THE DALEK One of the robots that threatened Earth ... but were destroyed by Dr. Who.