Agyeman to be next Doctor Who sidekick 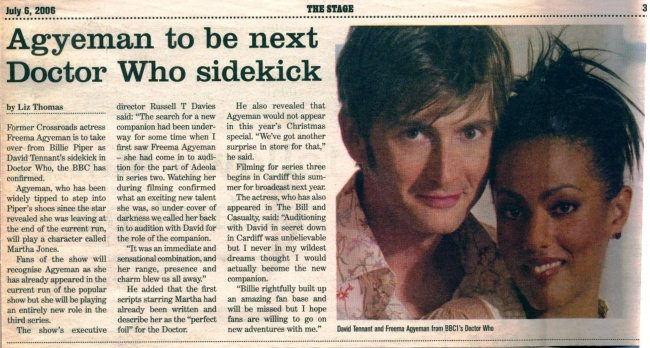 Former Crossroads actress Freema Agyeman is to take over from Billie Piper as David Tennant's sidekick in Doctor Who, the BBC has confirmed.

Agyeman, who has been widely tipped to step into Piper's shoes since the star revealed she was leaving at the end of the current run, will play a character called Martha Jones.

Fans of the show will recognise Agyeman as she has already appeared in the current run of the popular show but she will be playing an entirely new role in the third series.

The show's executive director Russell T Davies said: "The search for a new companion had been underway for some time when I first saw Freema Agyeman — she had come in to audition for the part of Adeola in series two. Watching her during filming confirmed what an exciting new talent she was, so under cover of darkness we called her back in to audition with David for the role of the companion.

"It was an immediate and sensational combination, and her range, presence and charm blew us all away."

He added that the first scripts starring Martha had already been written and describe her as the "perfect foil" for the Doctor.

He also revealed that Agyeman would not appear in this year's Christmas special. "We've got another surprise in store for that," he said.

Filming for series three begins in Cardiff this summer for broadcast next year.

The actress, who has also appeared in The Bill and Casualty, said: "Auditioning with David in secret down in Cardiff was unbelievable but I never in my wildest dreams thought I would actually become the new companion.

"Billie rightfully built up an amazing fan base and will be missed but I hope fans are willing to go on new adventures with me."

Caption: David Tennant and Freema Agyeman from BBC1's Doctor Who