Alexei Sayle on being a minor celebrity 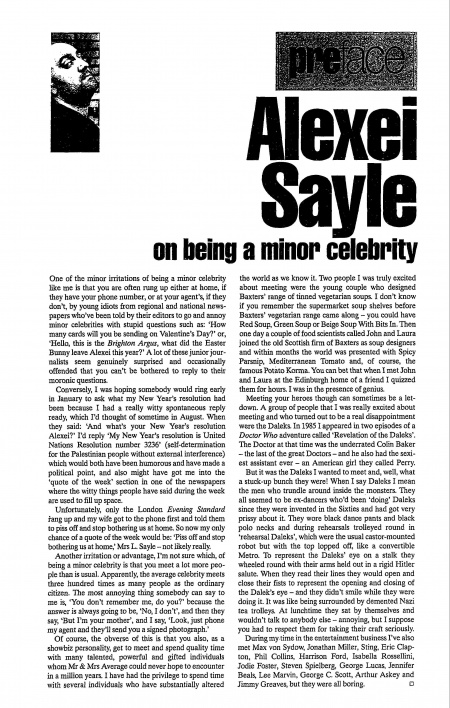 One of the minor irritations of being a minor celebrity like me is that you are often rung up either at home, if they have your phone number, or at your agent's, if they don't, by young idiots from regional and national newspapers who've been told by their editors to go and annoy minor celebrities with stupid questions such as: 'How many cards will you be sending on Valentine's Day?' or, 'Hello, this is the Brighton Argus, what did the Easter Bunny leave Alexei this year?' A lot of these junior journalists seem genuinely surprised and occasionally offended that you can't be bothered to reply to their moronic questions.

Conversely, I was hoping somebody would ring early in January to ask what my New Year's resolution had been because I had a really witty spontaneous reply ready, which I'd thought of sometime in August. When they said: 'And what's your New Year's resolution Alexei?' I'd reply 'My New Year's resolution is United Nations Resolution number 3236' (self-determination for the Palestinian people without external interference) which would both have been humorous and have made a political point, and also might have got me into the 'quote of the week' section in one of the newspapers where the witty things people have said during the week are used to fill up space.

Another irritation or advantage, I'm not sure which, of being a minor celebrity is that you meet a lot more people than is usual. Apparently, the average celebrity meets three hundred times as many people as the ordinary citizen. The most annoying thing somebody can say to me is, 'You don't remember me, do you?' because the answer is always going to be, 'No, I don't', and then they say, 'But I'm your mother', and I say, 'Look, just phone my agent and they'll send you a signed photograph.'

Of course, the obverse of this is that you also, as a showbiz personality, get to meet and spend quality time with many talented, powerful and gifted individuals whom Mr & Mrs Average could never hope to encounter in a million years. I have had the privilege to spend time with several individuals who have substantially altered the world as we know it. Two people I was truly excited about meeting were the young couple who designed Baxters' range of tinned vegetarian soups. I don't know if you remember the supermarket soup shelves before Baxters' vegetarian range came along — you could have Red Soup, Green Soup or Beige Soup With Bits In. Then one day a couple of food scientists called John and Laura joined the old Scottish firm of Baxters as soup designers and within months the world was presented with Spicy Parsnip, Mediterranean Tomato and, of course, the famous Potato Korma. You can bet that when I met John and Laura at the Edinburgh home of a friend I quizzed them for hours. I was in the presence of genius.

Meeting your heroes though can sometimes be a letdown. A group of people that I was really excited about meeting and who turned out to be a real disappointment were the Daleks. In 1985 I appeared in two episodes of a Doctor Who adventure called 'Revelation of the Daleks'. The Doctor at that time was the underrated Colin Baker — the last of the great Doctors — and he also had the sexiest assistant ever — an American girl they called Perry.

But it was the Daleks I wanted to meet and, well, what a stuck-up bunch they were! When I say Daleks I mean the men who trundle around inside the, monsters. They all seemed to be ex-dancers who'd been 'doing' Daleks since they were invented in the Sixties and had got very prissy about it. They wore black dance pants and black polo necks and during rehearsals trolleyed round in 'rehearsal Daleks', which were the usual castor-mounted robot but with the top lopped off, like a convertible Metro. To represent the Daleks' eye on a stalk they wheeled round with their arms held out in a rigid Hitler salute. When they read their lines they would open and close their fists to represent the opening and closing of the Dalek's eye — and they didn't smile while they were doing it. It was like being surrounded by demented Nazi tea trolleys. At lunchtime they sat by themselves and wouldn't talk to anybody else — annoying, but I suppose you had to respect them for taking their craft seriously.