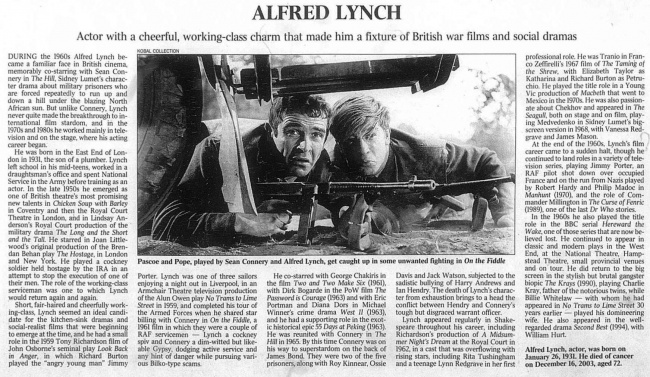 Actor with a cheerful, working-class charm that made him a fixture of British war films and social dramas

DURING the 1960s Alfred Lynch became a familiar face in British cinema, memorably co-starring with Sean Connery in The Hill, Sidney Lumet's character drama about military prisoners who are forced repeatedly to run up and down a hill under the blazing North African sun. But unlike Connery, Lynch never quite made the breakthrough to international film stardom, and in the 1970s and 1980s he worked mainly in television and on the stage, where his acting career began.

He was born in the East End of London in 1931, the son of a plumber. Lynch left school in his mid-teens, worked in a draughtsman's office and spent National Service in the Army before training as an actor. In the late 1950s he emerged as one of British theatre's most promising new talents in Chicken Soup with Barley in Coventry and then the Royal Court Theatre in London, and in Lindsay Anderson's Royal Court production of the military drama The Long and the Short and the Tall.

He starred in Joan Littlewood's original production of the Brendan Behan play The Hostage, in London and New York. He played a cockney soldier held hostage by the IRA in an attempt to stop the execution of one of their men. The role of the working-class serviceman was one to which Lynch would return again and again.

Short, fair-haired and cheerfully working-class, Lynch seemed an ideal candidate for the kitchen-sink dramas and social-realist films that were beginning to emerge at the time, and he had a small role in the 1959 Tony Richardson film of John Osborne's seminal play Look Back in Anger, in which Richard Burton played the "angry young man" Jimmy Porter. Lynch was one of three sailors enjoying a night out in Liverpool, in an Armchair Theatre television production of the Alun Owen play No Trams to Lime Street in 1959, and completed his tour of the Armed Forces when he shared star billing with Connery in On the Fiddle, a 1961 film in which they were a couple of RAF servicemen - Lynch a cockney spiv and Connery a dim-witted but likeable Gypsy, dodging active service and any hint of danger while pursuing various Bilko-type scams.

He co-starred with George Chakiris in the film Two and Two Make Six (1961), with Dirk Bogarde in the PoW film The Password is Courage (1963) and with Eric Portman and Diana Dors in Michael Winner's crime drama West 11 (1963), and he had a supporting role in the exotic historical epic 55 Days at Peking (1963). He was reunited with Connery in The Hill in 1965. By this time Connery was on his way to superstardom on the back of James Bond. They were two of the five prisoners, along with Roy Kinnear, Ossie Davis and Jack Watson, subjected to the sadistic bullying of Harry Andrews and Ian Hendry. The death of Lynch's character from exhaustion brings to a head the conflict between Hen-dry and Connery's tough but disgraced warrant officer.

Lynch appeared regularly in Shakespeare throughout his career, including Richardson's production of A Midsummer Night's Dream at the Royal Court in 1962, in a cast that was overflowing with rising stars, including Rita Tushingham and a teenage Lynn Redgrave in her first professional role. He was Tranio in Franco Zeffirelli's 1967 film of The Taming of the Shrew, with Elizabeth Taylor as Katharina and Richard Burton as Petruchio. He played the title role in a Young Vic production of Macbeth that went to Mexico in the 1970s. He was also passionate about Chekhov and appeared in The Seagull, both on stage and on film, playing Medvedenko in Sidney Lumet's big-screen version in 1968, with Vanessa Redgrave and James Mason.

At the end of the 1960s, Lynch's film career came to a sudden halt, though he continued to land roles in a variety of television series, playing Jimmy Porter, an RAF pilot shot down over occupied France and on the run from Nazis played by Robert Hardy and Philip Madoc in Manhunt (1970), and the role of Commander Millington in The Curse of Fenric (1989), one of the last Dr Who stories.

In the 1960s he also played the title role in the BBC serial Hereward the Wake, one of those series that are now believed lost. He continued to appear in classic and modern plays in the West End, at the National Theatre, Hampstead Theatre, small provincial venues and on tour. He did return to the big screen in the stylish but brutal gangster biopic The Krays (1990), playing Charlie Kray, father of the notorious twins, while Billie Whitelaw - with whom he had appeared in No Trams to Lime Street 30 years earlier - played his domineering wife. He also appeared in the well-regarded drama Second Best (1994), with William Hurt.