Aliens, perverts and fun for all the family 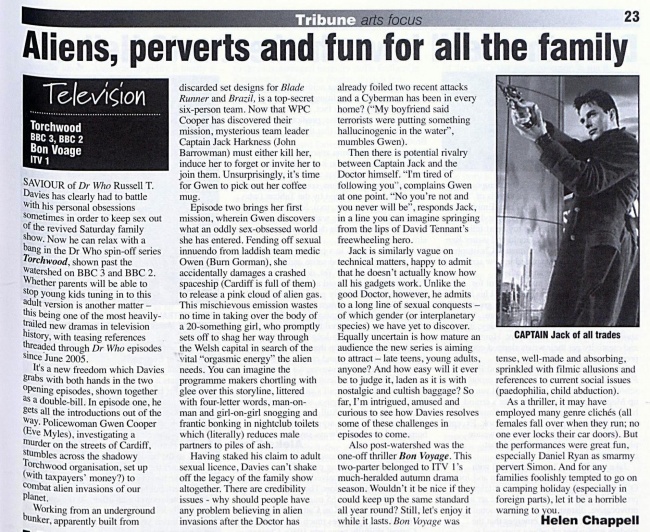 SAVIOUR of Dr Who Russell T. Davies has clearly had to battle With his personal obsessions sometimes in order to keep sex out of the revived Saturday family show. Now he can relax with a bang in the Dr Who spin-off series Torchwood, shown past the Watershed on BBC 3 and BBC 2. Whether parents will be able to Stop young kids tuning in to this adult version is another matter —this being one of the most heavily-trailed new dramas in television history, with teasing references threaded through Dr Who episodes since June 2005.

It's a new freedom which Davies grabs with both hands in the two opening episodes, shown together as a double-bill. In episode one, he gets all the introductions out of the way. Policewoman Gwen Cooper (Eve Myles), investigating a murder on the streets of Cardiff, stumbles across the shadowy Torchwood organisation, set up (with taxpayers' money?) to Combat alien invasions of our planet.

Working from an underground bunker, apparently built from discarded set designs for Blade Runner and Brazil, is a top-secret six-person team. Now that WPC Cooper has discovered their mission, mysterious team leader Captain Jack Harkness (John Barrowman) must either kill her, induce her to forget or invite her to join them. Unsurprisingly, it's time for Gwen to pick out her coffee mug.

Episode two brings her first mission, wherein Gwen discovers what an oddly sex-obsessed world she has entered. Fending off sexual innuendo from laddish team medic Owen (Burn Gorman), she accidentally damages a crashed spaceship (Cardiff is full of them) to release a pink cloud of alien gas. This mischievous emission wastes no time in taking over the body of a 20-something girl, who promptly sets off to shag her way through the Welsh capital in search of the vital "orgasmic energy" the alien needs. You can imagine the programme makers chortling with glee over this storyline, littered with four-letter words, man-on-man and girl-on-girl snogging and frantic bonking in nightclub toilets which (literally) reduces male partners to piles of ash.

Having staked his claim to adult sexual licence, Davies can't shake off the legacy of the family show altogether. There are credibility issues - why should people have any problem believing in alien invasions after the Doctor has already foiled two recent attacks and a Cyberman has been in every home? ("My boyfriend said terrorists were putting something hallucinogenic in the water", mumbles Gwen).

Then there is potential rivalry between Captain Jack and the Doctor himself. "I'm tired of following you", complains Gwen at one point. "No you're not and you never will be", responds Jack, in a line you can imagine springing from the lips of David Tennant's freewheeling hero.

Jack is similarly vague on technical matters, happy to admit that he doesn't actually know how all his gadgets work. Unlike the good Doctor, however, he admits to a long line of sexual conquests —of which gender (or interplanetary species) we have yet to discover. Equally uncertain is how mature an audience the new series is aiming to attract — late teens, young adults, anyone? And how easy will it ever be to judge it, laden as it is with nostalgic and cultish baggage? So far, I'm intrigued, amused and curious to see how Davies resolves some of these challenges in episodes to come.

Also post-watershed was the one-off thriller Bon Voyage. This two-parter belonged to ITV l's much-heralded autumn drama season. Wouldn't it be nice if they could keep up the same standard all year round? Still, let's enjoy it while it lasts. Bon Voyage was tense, well-made and absorbing, sprinkled with filmic allusions and references to current social issues (paedophilia, child abduction).

As a thriller, it may have employed many genre clichés (all females fall over when they run; no one ever locks their car doors). But the performances were great fun, especially Daniel Ryan as smarmy pervert Simon. And for any families foolishly tempted to go on a camping holiday (especially in foreign parts), let it be a horrible warning to you.

Caption: CAPTAIN Jack of all trades