Am I too queer for Top Gear? 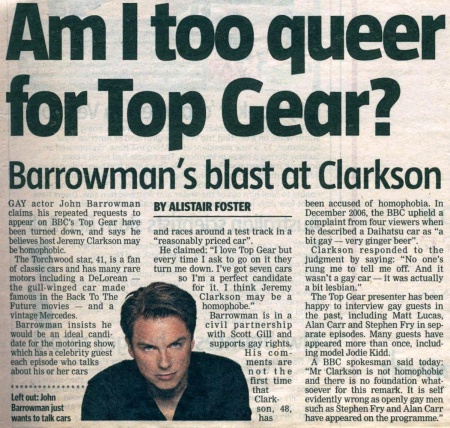 GAY actor John Barrowman claims his repeated requests to appear on BBC's Top Gear have been turned down, and says he believes host Jeremy Clarkson may be homophobic.

The Torchwood star, 41, is a fan of classic cars and has many rare motors including a DeLorean the gull-winged car made famous in the Back To The Future movies — and a vintage Mercedes. Barrowman insists he would be an ideal candidate for the motoring show, which has a celebrity guest each episode who talks about his or her cars and races around a test track in a "reasonably priced car".

He claimed: "I love Top Gear but every time I ask to go on it they turn me down. I've got seven cars so I'm a perfect candidate for it. I think Jeremy Clarkson may be a homophobe." Barrowman is in a civil partnership with Scott Gill and supports gay rights. His comments are not the first time that

Clarkson, 48, has been accused of homophobia. In December 2006, the BBC upheld a complaint from four viewers when he described a Daihatsu car as "a bit gay — very ginger beer".

Clarkson responded to the judgment by saying: "No one's rung me to tell me off. And it wasn't a gay car — it was actually a bit lesbian."

The Top Gear presenter has been happy to interview gay guests in the past, including Matt Lucas, Alan Carr and Stephen Fry in separate episodes. Many guests have appeared more than once, including model Jodie Kidd.

A BBC spokesman said today: "Mr Clarkson is not homophobic and there is no foundation whatsoever for this remark. It is self evidently wrong as openly gay men such as Stephen Fry and Alan Carr have appeared on the programme."