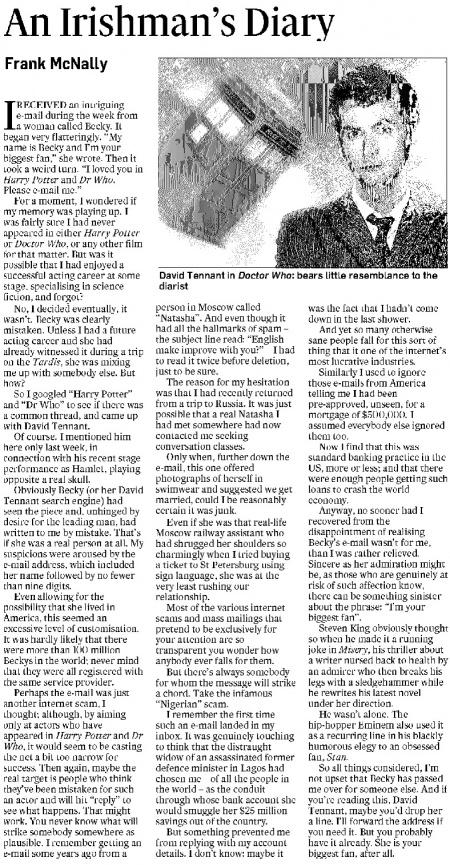 I RECEIVED an intriguing e-mail during the week from a woman called Becky. It began very flatteringly. "My name is Becky and I'm your biggest fan," she wrote. Then it took a weird turn. "I loved you in Harry Potter and Dr Who. Please e-mail me."

For a moment, I wondered if my memory was playing up. I was fairly sure I had never appeared in either Harry Potter or Doctor Who, or any other film for that matter. But was it possible that I had enjoyed a successful acting career at some stage, specialising in science fiction, and forgot?

No, I decided eventually, it wasn't. Becky was clearly mistaken. Unless I had a future acting career and she had already witnessed it during a trip on the Tardis, she was mixing me up with somebody else. But how?

So I googled "Harry Potter" and "Dr Who" to see if there was a common thread, and came up with David Tennant.

Of course. I mentioned him here only last week, in connection with his recent stage performance as Hamlet, playing opposite a real skull.

Obviously Becky (or her David Tennant search engine) had seen the piece and, unhinged by desire for the leading man, had written to me by mistake. That's if she was a real person at all. My suspicions were aroused by the e-mail address, which included her name followed by no fewer than nine digits.

Even allowing for the possibility that she lived in America, this seemed an excessive level of customisation. It was hardly likely that there were more than 100 million Beckys in the world; never mind that they were all registered with the same service provider.

Perhaps the e-mail was just another internet scam, I thought; although, by aiming only at actors who have appeared in Harry Potter and Dr Who, it would seem to be casting the net a bit too narrow for success. Then again, maybe the real target is people who think they've been mistaken for such an actor and will hit "reply" to see what happens. That might work. You never know what will strike somebody somewhere as plausible. I remember getting an e-mail some years ago from a person in Moscow called "Natasha". And even though it had all the hallmarks of spam the subject line read: "English make improve with you?" - I had to read it twice before deletion, just to be sure.

The reason for my hesitation was that I had recently returned from a trip to Russia. It was just possible that a real Natasha I had met somewhere had now contacted me seeking conversation classes.

Only when, further down the e-mail, this one offered photographs of herself in swimwear and suggested we get married, could I be reasonably certain it was junk.

Even if she was that real-life Moscow railway assistant who had shrugged her shoulders so charmingly when I tried buying a ticket to St Petersburg using sign language, she was at the very least rushing our relationship.

Most of the various internet scams and mass mailings that pretend to be exclusively for your attention are so transparent you wonder how anybody ever falls for them.

But there's always somebody for whom the message will strike a chord. Take the infamous "Nigerian" scam.

I remember the first time such an e-mail landed in my inbox. It was genuinely touching to think that the distraught widow of an assassinated former defence minister in Lagos had chosen me - of all the people in the world - as the conduit through whose bank account she would smuggle her $25 million savings out of the country.

But something prevented me from replying with my account details. I don't know: maybe it was the fact that I hadn't come down in the last shower.

And yet so many otherwise sane people fall for this sort of thing that it one of the internet's most lucrative industries.

Similarly I used to ignore those e-mails from America telling me I had been pre-approved, unseen, for a mortgage of $500,000. I assumed everybody else ignored them too.

Now I find that this was standard banking practice in the US, more or less; and that there were enough people getting such loans to crash the world economy.

Anyway, no sooner had I recovered from the disappointment of realising Becky's e-mail wasn't for me, than I was rather relieved. Sincere as her admiration might be, as those who are genuinely at risk of such affection know, there can be something sinister about the phrase: "I'm your biggest fan".

Steven King obviously thought so when he made it a running joke in Misery, his thriller about a writer nursed back to health by an admirer who then breaks his legs with a sledgehammer while he rewrites his latest novel under her direction.

He wasn't alone. The hip-hopper Eminem also used it as a recurring line in his blackly humorous elegy to an obsessed fan, Stan.

So all things considered, I'm not upset that Becky has passed me over for someone else. And if you're reading this, David Tennant, maybe you'd drop her a line. I'll forward the address if you need it. But you probably have it already. She is your biggest fan, after all.

Caption: David Tennant in Doctor Who: bears little resemblance to the diarist