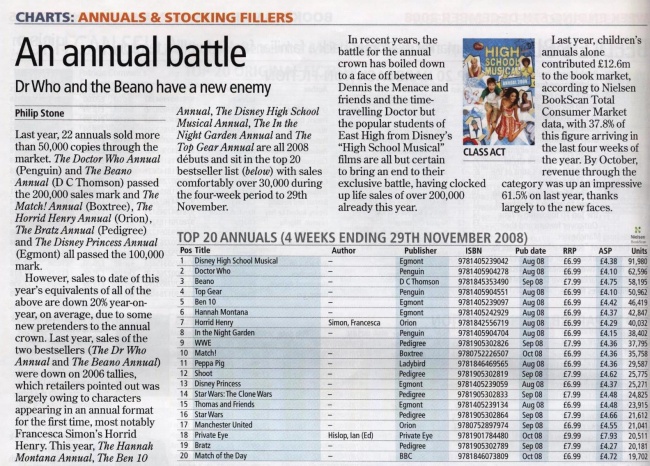 Dr Who and the Beano have a new enemy

Last year, 22 annuals sold more than 50,000 copies through the market. The Doctor Who Annual (Penguin) and The Beano Annual (D C Thomson) passed the 200,000 sales mark and The Match! Annual (Boxtree), The Horrid Henry Annual (Orion), The Bratz Annual (Pedigree) and The Disney Princess Annual (Egmont) all passed the 100,000 mark.

However, sales to date of this year's equivalents of all of the above are down 20% year-on-year, on average, due to some new pretenders to the annual crown. Last year, sales of the two bestsellers (The Dr Who Annual and The Beano Annual) were down on 2006 tallies, which retailers pointed out was largely owing to characters appearing in an annual format for the first rime, most notably Francesca Simon's Horrid Henry. This year, The Hannah Montana Annual, The Ben 10 Annual, The Disney High School Musical Annual, The In the Night Garden Annual and The Top Gear Annual are all 2008 débuts and sit in the top 20 bestseller list (below) with sales comfortably over 30,000 during the four-week period to 29th November.

In recent years, the battle for the annual crown has boiled down to a face off between Dennis the Menace and friends and the time-travelling Doctor but the popular students of East High from Disney's "High School Musical" films are all but certain to bring an end to their exclusive battle, having clocked up life sales of over 200,000 already this year.

Last year, children's annuals alone contributed £12.6m to the book market, according to Nielsen BookScan Total Consumer Market data, with 37.8% of this figure arriving in the last four weeks of the year. By October, revenue through the category was up an impressive 61.5% on last year, thanks largely to the new faces.