An escape from reality 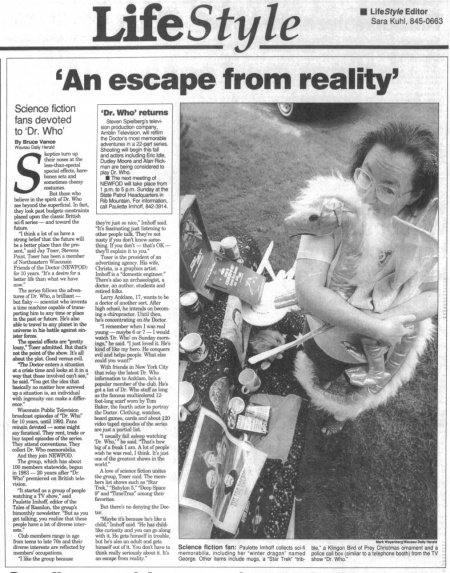 Skeptics turn up their noses at the less-than-special special effects, bare-bones sets and sometimes cheesy costumes.

But those who believe in the spirit of Dr. Who see beyond the superficial. In fact, they look past budgets constraints placed upon the classic British sci-fi series — and toward the future.

I think a lot of us have a strong belief that the future will be a better place than the present," said Jay Toser, Stevens Point. Toser has been a member of Northeastern Wisconsin Friends of the Doctor (NEWFOD) for 10 years. "It's a desire for a better life than what we have now."

The series follows the adventures of Dr. Who, a brilliant — but flaky — scientist who invents a time machine capable of transporting him to any time or place in the past or future. He's also able to travel to any planet in the universe in his battle against sinister forces.

The special effects are "pretty lousy," Toser admitted. But that's not the point of the show. It's all about the plot. Good versus evil.

"The Doctor enters a situation at a crisis time and looks at it in a way that those involved can't see," he said. "You get the idea that basically no matter how screwed up a situation is, an individual with ingenuity can make a difference."

Wisconsin Public Television broadcast episodes of "Dr. Who" for 10 years, until 1992. Fans remain devoted — some might say fanatical. They rent, trade or buy taped episodes of the series. They attend conventions. They collect Dr. Who memorabilia.

The group, which has about 100 members statewide, began in 1983 — 20 years after "Dr. Who" premiered on British television.

It started as a group of people watching a TV show," said Paulette Imhoff, editor of the Tales of Rassilon, the group's bimonthly newsletter. But as you get talking, you realize that these people have a lot of diverse interests."

Club members range in age from teens to late 70s and their diverse interests are reflected by members' occupations.

"I like the group because they're just so nice," Imhoff said. "It's fascinating just listening to other people talk. They're not nasty if you don't know something. If you don't — that's OK —they'll explain it to you."

Toser is the president of an advertising agency. His wife, Christa, is a graphics artist. Imhoff is a "domestic engineer." There's also an archaeologist, a doctor, an author, students and retired folks.

Larry Anklam, 17, wants to be a doctor of another sort. After high school, he intends on becoming a chiropractor. Until then, he's concentrating on the Doctor.

"I remember when I was real young — maybe 6 or 7 — I would watch Dr. Who' on Sunday mornings," he said. I just loved it. He's kind of like my hero. He conquers evil and helps people. What else could you want?"

With friends in New York City that relay the latest Dr. Who information to Anklam, he's a popular member of the club. He's got a list of Dr. Who stuff as long as the famous multicolored 12-foot-long scarf worn by Tom Baker, the fourth actor to portray the Doctor. Clothing, watches, board games, cards and about 120 video taped episodes of the series are just a partial list.

"I usually fall asleep watching Dr. Who: " he said. "That's how big of a freak I am. A lot of people wish he was real, I think. It's just one of the greatest shows in the world."

A love of science fiction unites the group, Toser said. The members list shows such as "Star Trek," "Babylon 5," "Deep Space 9" and "TimeTrax" among their favorites.

But there's no denying the Doctor.

"Maybe it's because he's like a child," Imhoff said. "He has childlike curiosity and you can go along with it. He gets himself in trouble, but he's also an adult and gets himself out of it. You don't have to think really seriously about it. It's an escape from reality."

Caption: Science fiction fan: Paulette Imhoff collects sci-fi memorabilia, including her "winter dragon" named George. Other items include mugs. a "Star Trek" "tribble," a Klingon Bird of Prey Christmas ornament and a police call box (similar to a telephone booth) from the TV show "Dr. Who."

Steven Spielberg's television production company, Amblin Television, will refilm the Doctor's most memorable adventures in a 22-part series. Shooting will begin this fall and actors including Eric Idle, Dudley Moore and Alan Rickman are being considered to play Dr. Who.

The next meeting of NEWFOD will take place from 1 p.m. to 5 p.m. Sunday at the State Patrol Headquarters in Rib Mountain. For information, call Paulette Imhoff, 842-3914.