And now for Miss Who? 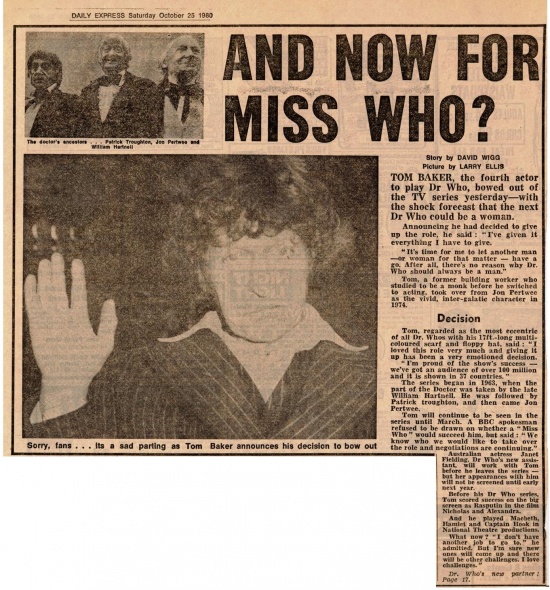 TOM BAKER, the fourth actor to play Dr Who, bowed out of the TV series yesterday—with the shock forecast that the next Dr Who could be a woman.

Announcing he had decided to give up the role, he said : "I've given it everything I have to give.

"It's time for me to let another man —or woman for that matter — have a go. After all, there's no reason why Dr. Who should always be a man."

Tom, a former building worker who studied to be a monk before he switched to acting, took over from Jon Pertwee as the vivid, inter-galatic character in 1974.

Tom, regarded as the most eccentric of all Dr. Whos with his 17ft.-long multicoloured scarf and floppy hat, said : "I loved this role very much and giving it up has been a very emotioned decision.

"I'm proud of the show's success — we've got an audience of over 100 million and it is shown in 37 countries."

The series began in 1963, when the part of the Doctor was taken by the late William Hartnell. He was followed by Patrick Troughton, and then came Jon Pertwee.

Tom will continue to be seen in the series until March. A BBC spokesman refused to be drawn on whether a "Miss Who " would succeed him, but said : "We know who we would like to take over the role and negotiations are continuing."

Australian actress Janet Fielding. Dr Who's new assistant, will work with Tom before he leaves the series — but her appearances with him will not be screened until early next year.

Before his Dr Who series, Tom scored success on the big screen as Rasputin in the film Nicholas and Alexandra.

And he played Macbeth, Hamlet and Captain Hook in National Theatre productions.

What now ? "I don't have another job to go to," he admitted. But I'm sure new ones will come up and there will be other challenges. I love challenges."

Sorry, fans ... Its a sad parting as Tom Baker announces his decision to bow out