And now for a lampshade solo 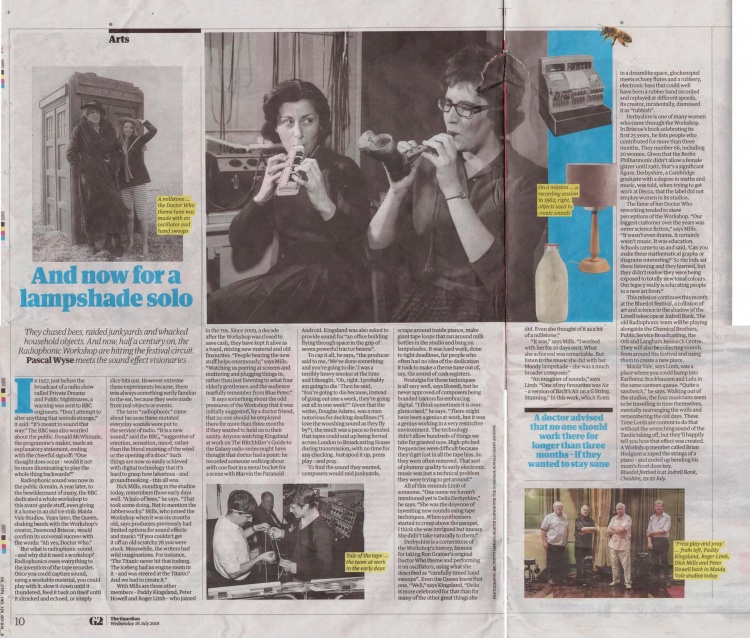 They chased bees, raided junkyards and whacked household objects. And now, half a century on, the Radiophonic Workshop are hitting the festival circuit. Pascal Wyse meets the sound effect visionaries

In 1957, just before the broadcast of a radio show called Private Dreams and Public Nightmares, a warning was sent to BBC engineers. "Don't attempt to alter anything that sounds strange," it said. "It's meant to sound that way." The BBC was also worried about the public. Donald McWhinnie, the programme's maker, made an explanatory statement, ending with the cheerful signoff: "One thought does occur - would it not be more illuminating to play the whole thing backwards?"

Radiophonic sound was now in the public domain. A year later, to the bewilderment of many, the BBC dedicated a whole workshop to this avant-garde stuff, even giving it a home in an old ice rink: Maida Vale Studios. Years later, the Queen, shaking hands with the Workshop's creator, Desmond Briscoe, would confirm its universal success with the words: "Ali yes, Doctor Who."

But what is radiophonic sound - and why did it need a workshop? Radiophonics owes everything to the invention of the tape recorder. Once you could capture sound, using a workable material, you could play with it: slow it down until it thundered, feed it back on itself until it shrieked and echoed, or simply slice bits out. However extreme these experiments became, there was always something eerily familiar to the ear, because they were made from real objects or events.

The term "radiophonic" came about because these mutated everyday sounds were put to the service of radio. "It is a new sound," said the BBC, "suggestive of emotion, sensation, mood, rather than the literal moaning of the wind or the opening of a door? Such things are now so easily achieved with digital technology that it's hard to grasp how laborious - and groundbreaking - this all was.

Dick Mills, standing in the studios today, remembers those early days well. "A halo of bees," he says. "That took some doing. Not to mention the Jabberwocky!' Mills, who joined the Workshop when it was six months old, says producers previously had limited options for sound effects and music: "If you couldn't get it off an old scratchy 78 you were stuck. Meanwhile, the writers had wild imaginations. For instance, 'The Titanic never hit that iceberg. The iceberg had an engine room in it - and was steered at the Titanic!' And we had to create it.

With Mills are three other members - Paddy Kingsland, Peter Howell and Roger Limb - who joined in the 70s. Since 2009, a decade after the Workshop was closed to save cash, they have kept it alive as a band, mixing new material and old favourites. "People hearing the new stuff helps enormously," says Mills. "Watching us peering at screens and muttering and plugging things in, rather than just listening to what four elderly gentlemen and the audience tearfully remember from Blue Peter!"

It says something about the odd pressures of the Workshop that it was initially suggested, by a doctor friend, that no one should be employed there for more than three months if they wanted to hold on to their sanity. Anyone watching Kingsland at work on The Hitchhiker's Guide to the Galaxy radio series might have thought that doctor had a point: he recorded someone walking about with one foot in a metal bucket for a scene with Marvin the Paranoid Android. Kingsland was also asked to provide sound for "an office building flying through space in the grip of seven powerful tractor beams".

To cap it all, he says, "the producer said to me, 'We've done something and you're going to die! I was a terribly heavy smoker at the time and I thought, 'Oh, right. I probably am going to die: Then he said, 'You're going to die because, instead of going out one a week, they're going out all in one week!'" Given that the writer, Douglas Adams, was a man notorious for ducking deadlines ("I love the wooshing sound as they fly by"), the result was a pace so frenzied that tapes could end up being ferried across London to Broadcasting House during transmission, with no time for any checking. Just spool it up, press play - and pray.

To find the sound they wanted, composers would raid junkyards, scrape around inside pianos, make giant tape loops that ran around milk bottles in the studio and bang on lampshades. It was hard work, done to tight deadlines, for people who often had no idea of the dedication it took to make a theme tune out of, say, the sound of cash registers.

Nostalgia for those techniques is all very well, says Howell, but he never approved of composers being branded traitors for embracing digital. "I think sometimes it is over-glamorised," he says. "There might have been a genius at work, but it was a genius working in a very restrictive environment. The technology didn't allow hundreds of things we take for granted now. High-pitched frequencies were difficult because they'd get lost in all the tape hiss. So they were often removed. That sort of plummy quality to early electronic music was just a technical problem they were trying to get around!'

All of this reminds Limb of someone. "One name we haven't mentioned yet is Delia Derbyshire," he says. "She was the doyenne of inventing new sounds using tape techniques. When synthesisers started to creep above the parapet, I think she was intrigued but uneasy. She didn't take naturally to them."

Derbyshire is a cornerstone of the Workshop's history, famous for taking Ron Grainer's original Doctor Who theme and performing it on oscillators, using what she described as "carefully timed hand swoops". Even the Queen knew that one. "Well," says Kingsland, "Delia is more celebrated for that than for many of the other great things she did. Even she thought of it as a bit of a millstone."

"It was," says Mills. "I worked with her for 10 days on it. What she achieved was remarkable. But listen to the music she did with her bloody lampshade - she was a much broader composer?'

"An imaginer of sounds," says Limb. "One of my favourites was Air - a version of Bach's Air on a G String. Stunning?' In this work, which floats in a dreamlike space, glockenspiel meets echoey flutes and a rubbery, electronic bass that could well have been a rubber band recorded and replayed at different speeds. Its creator, incidentally, dismissed it as "rubbish".

Derbyshire is one of many women who came through the Workshop. In Briscoe's book celebrating its first 25 years, he lists people who contributed for more than three months. They number 66, including 20 women. Given that the Berlin Philharmonic didn't allow a female player until 1982, that's a significant figure. Derbyshire, a Cambridge graduate with a degree in maths and music, was told, when trying to get work at Decca, that the label did not employ women in its studios.

The fame of her Doctor Who reworking tended to skew perceptions of the Workshop. "Our biggest customer over the years was never science fiction!' says Mills. "It wasn't even drama. It certainly wasn't music. It was education. Schools came to us and said, Can you make these mathematical graphs or diagrams interesting?' So the kids sat there listening and they teamed, but they didn't realise they were being exposed to totally new tonal colours. Our legacy really is educating people to a new art form?'

This mission continues this month at the Bluedot festival, a collision of art and science in the shadow of the Lovell telescope at Jodrell Bank. The old Radiophonic team will be playing alongside the Chemical Brothers, Public Service Broadcasting, the Orb and Langham Research Centre. They will also be collecting sounds from around the festival and using them to create a new piece.

Maida Vale, says Limb, was a place where you could bump into Karlheinz Stockhausen and Lulu in the same canteen queue. "Quite a sandwich!' he says. Walking out of the studios, the four musicians seem to be travelling in time themselves, mentally rearranging the walls and remembering the old days. These Time Lords are content to do that without the wrenching sound of the Tardis taking off, but they'll happily tell you how that effect was created. A Workshop member called Brian Hodgson scraped the strings of a piano - and ended up bending his mum's front door key.

A millstone ... the Doctor Who theme tune was made with an oscillator and hand swoops

On a mission ... a recording session in 1962; right, objects used to create sounds

Tale of the tape ... the team at work in the early days