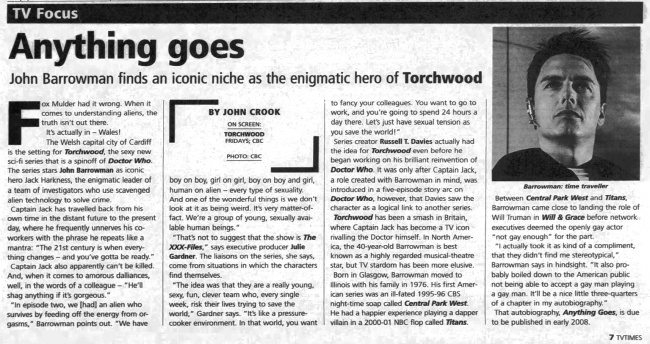 Fox Mulder had it wrong. When it comes to understanding aliens, the truth isn't out there. It's actually in — Wales!

The Welsh capital city of Cardiff is the setting for Torchwood, the sexy new sci-fi series that is a spinoff of Doctor Who. The series stars John Barrowman as iconic hero Jack Harkness, the enigmatic leader of a team of investigators who use scavenged alien technology to solve crime.

Captain Jack has travelled back from his own time in the distant future to the present day, where he frequently unnerves his coworkers with the phrase he repeats like a mantra: "The 21st century is when everything changes — and you've gotta be ready." Captain Jack also apparently can't be killed. And, when it comes to amorous dalliances, well, in the words of a colleague — "He'll shag anything if it's gorgeous."

"In episode two, we [had] an alien who survives by feeding off the energy from orgasms," Barrowman points out. "We have boy on boy, girl on girl, boy on boy and girl, human on alien — every type of sexuality. And one of the wonderful things is we don't look at it as being weird. It's very matter-of-fact. We're a group of young, sexually available human beings."

"That's not to suggest that the show is The XXX-Files," says executive producer Julie Gardner. The liaisons on the series, she says, come from situations in which the characters find themselves.

"The idea was that they are a really young, sexy, fun, clever team who, every single week, risk their lives trying to save the world," Gardner says. "It's like a pressure-cooker environment. In that world, you want to fancy your colleagues. You want to go to work, and you're going to spend 24 hours a day there. Let's just have sexual tension as you save the world!"

Series creator Russell T. Davies actually had the idea for Torchwood even before he began working on his brilliant reinvention of Doctor Who. It was only after Captain Jack, a role created with Barrowman in mind, was introduced in a five-episode story arc on Doctor Who, however, that Davies saw the character as a logical link to another series. Torchwood has been a smash in Britain, where Captain Jack has become a TV icon rivalling the Doctor himself. In North America, the 40-year-old Barrowman is best known as a highly regarded musical-theatre star, but TV stardom has been more elusive. Born in Glasgow, Barrowman moved to Illinois with his family in 1976. His first American series was an ill-fated 1995-96 CBS night-time soap called Central Park West. He had a happier experience playing a dapper villain in a 2000-01 NBC flop called Titans.

Between Central Park West and Titans, Barrowman came close to landing the role of Will Truman in Will & Grace before network executives deemed the openly gay actor "not gay enough" for the part.

"I actually took it as kind of a compliment, that they didn't find me stereotypical," Barrowman says in hindsight. "It also probably boiled down to the American public not being able to accept a gay man playing a gay man. It'll be a nice little three-quarters of a chapter in my autobiography."

That autobiography, Anything Goes, is due to be published in early 2008.