Area fans know who's Who 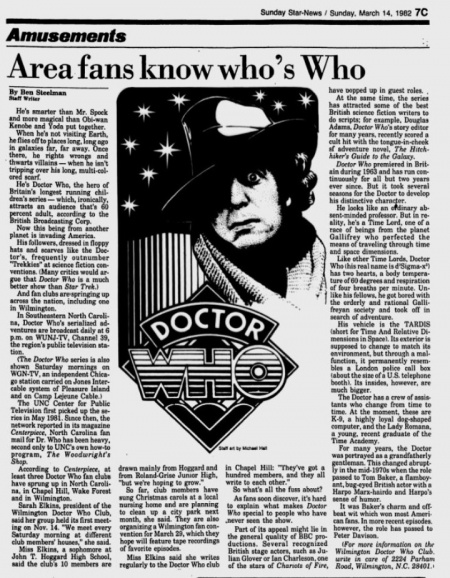 He's smarter than Mr. Spock and more magical than Obi-wan Kenobe and Yoda put together.

When he's not visiting Earth, he flies onto places long, long ago in galaxies far, far away. Once there, he rights wrong, and thwarts villains - when he isn't tapping over his long, multi-colored scarf.

He's Doctor Who, the hero of Britain's longest running chit-belie aeries - which, ironically, attracts an audience that's 60 percent adult, according to the British Broadcasting Corp.

Now this being from another planet is invading America.

His followers, dressed in floppy hats and scarves like the Doctor's. frequently outnumber "Trekkies" at science fiction conventions. (Many critics ould argue that Doctor Who is a much better show than Star Trek.)

And fan clubs are springing up across the nation, including one in Wilmington.

(The Doctor Who series is also shown Saturday mornings on WGN-TV, an independent Chicago station carried on Jones Intercable system of Pleasure Island and on Camp Lejeune Cable.)

The UNC Center for Public Television first picked up the series in May 1981. Since then, the network reported in its magazine Centerpiece, North Carolina fan mail for Dr. Who has been heavy, second only to UNC's own how-to program, The Woodwright's Shop.

According to Centerpiece, at least three Doctor Who fan clubs have sprung up in North Carolina, in Chapel Hill, Wake Forest and in Wilmington.

Sarah Elkins, president of the Wilmington Doctor Who Club, said her group held its first meeting on Nov. 14. "We meet every Saturday morning at different club members' houses." she said.

Miss Elkins. a sophomore at John T. Hoggard High School, said the club's 10 members are drawn mainly from Hoggard and from Roland-Grise Junior High, "but we're hoping to grow."

So far, club members have sung Christmas carols at a local nursing home and are planning to clean up a city park next month, she said. They are also organizing a Wilmington fan convention for March 29, which they hope will feature tape recordings of favorite episodes.

Miss Elkins said she writes regularly to the Doctor Who club in Chapel Hill: "They've got a hundred members, and they all write to each other."

So what's all the fuss about?

As fans soon discover, it's hard to explain what makes Doctor Who special to people who have never teen the show.

Part of its appeal might lie in the general quality of BBC productions. Several recognized British stage actors: such as Julian Glover or Ian Charleson, one of the stars of Chariots of Fire, have mopped up in guest roles. At the same time, the series has attracted some of the best British science fiction writers to do scripts; for example, Douglas Adams. Doctor Who's story editor for many years. recently scored a cult hit with the tongue-in-cheek of adventure novel, The Hitch-hiker's Guide to the Galaxy.

Doctor Who premiered in Britain during 1963 and has run continuously for all but two years ever since. But it took several seasons for the Doctor to develop his distinctive character.

He looks like an ordinary absent-minded professor. But in reality, he's a Time Lord, one of a race of beings from the planet Gallifrey who perfected the means of traveling through time and space dimensions.

Like other Time Lords. Doctor Who (his real name is d'Sigma-x³) has two hearts, a body temperature of 60 degrees and respiration of four breaths per minute. Unlike his fellows, he got bored with I the orderly and rational Gallifreyan society and took off in search of adventure.

His vehicle is the TARDIS (short for Time And Relative Dimensions in Spare). Its exterior is supposed to change to match its environment, but through a malfunction, it permanently resembles a London police all box (about the size of a U S. telephone booths). Its insides. however, are much bigger.

The Doctor has a crew of assistant, who change from time to time. At the moment, these are K-9, a highly loyal dog-shaped computer, and the Lady Romana, a young, recent graduate of the Time Academy.

For many years, the Doctor was portrayed as a grandfatherly gentleman. This changed abruptly in the mid-1970s when the role passed to Tom Baker, a flamboyant, bug-eyed British actor with Harpo Marx-hairdo and Harpo's sense of humor.

It was Baker's charm and offbeat wit which won most American fans. In more recent episodes, however, the role has passed to Peter Davison.

For more information on the Wilmington Doctor Who Club, write in care of 2224 Parham Road, Wilmington, N.C. 28101.