Arriving at end of the Lime 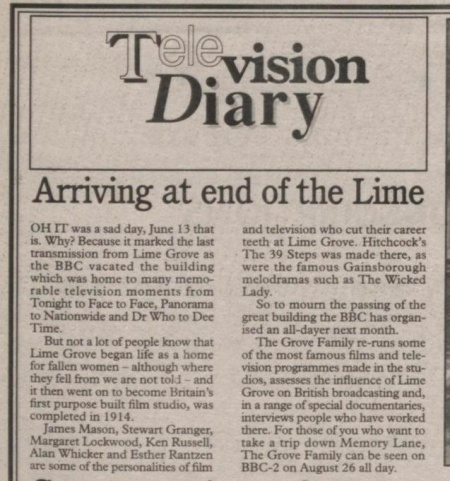 OH IT was a sad day, June 13 that is. Why? Because it marked the last transmission from Lime Grove as the BBC vacated the building which was home to many memorable television moments from Tonight to Face to Face, Panorama to Nationwide and Dr Who to Dee Time.

But not a lot of people know that Lime Grove began life as a home for fallen women - although where they fell from we are not told - and it then went on to become Britain's first purpose built film studio, was completed in 1914.

James Mason, Stewart Granger, Margaret Lockwood, Ken Russell, Alan Whicker and Esther Rantzen are some of the personalities of film and television who cut their career teeth at Lime Grove. Hitchcock's The 39 Steps was made there, as were the famous Gainsborough melodramas such as The Wicked Lady.

So to mourn the passing of the great building the BBC has organised an all-dayer next month.

The Grove Family re-runs some of the most famous films and television programmes made in the studios, assesses the influence of Lime Grove on British broadcasting and, in a range of special documentaries, interviews people who have worked there. For those of you who want to take a trip down Memory Lane, The Grove Family can be seen on BBC-2 on August 26 all day.