At home with a Dalek 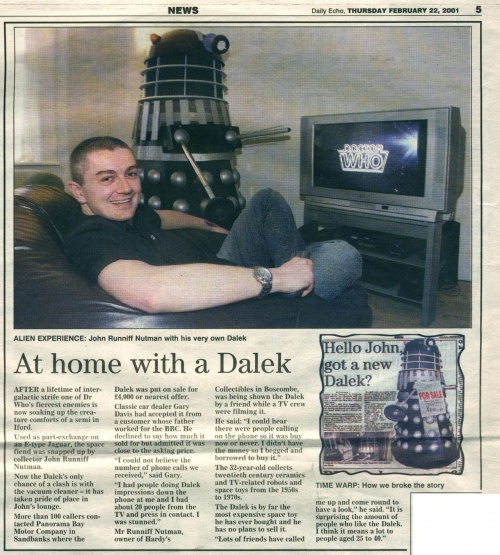 AFTER a lifetime of intergalactic strife one of Dr Who's fiercest enemies is now soaking up the creature comforts of a semi in Iford.

Used as part-exchange on an E-type Jaguar, the space fiend was snapped up by collector John Runniff Nutinan.

Now the Dalek's only chance of a clash is with the vacuum cleaner - it has taken pride of place in John's lounge.

More than 100 callers contacted Panorama Bay Motor Company in Sandbanks where the Dalek was put on sale for £4,000 or nearest offer.

Classic car dealer Gary Davis had accepted it from a customer whose father worked for the BBC. He declined to say how much it sold for but admitted it was close to the asking price.

"I could not believe the number of phone calls we received," said Gary.

"I had people doing Dalek impressions down the phone at me and I had about 20 people from the TV and preSs in contact. I was stunned."

Mr Runniff Nutman, owner of Hardy's Collectibles in Boscombe, was being shown the Dalek by a friend while a TV crew were filming it.

He said: "I could hear there were people calling on the phone so it was buy now or never. I didn't have the money so I begged and borrowed to buy it."

The 32-year-old collects twentieth century ceramics and TV-related robots and space toys from the 1950s to 1970s.

The Dalek is by far the most expensive space toy he has ever bought and he has no plans to sell it.

"Lots of friends have called me up and come round to have a look," he said. "It is surprising the amount of people who like the Dalek. I think it means a lot to people aged 25 to 40."

TIME WARP: How we broke the story

ALIEN EXPERIENCE: John Runniff Nutman with his very own Dalek