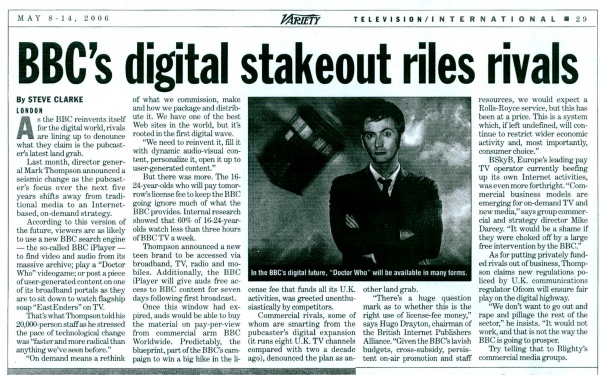 As the BBC reinvents itself for the digital world, rivals are lining up to denounce what they claim is the pubcaster's latest land grab.

Last month, director general Mark Thompson announced a seismic change as the pubcaster's focus over the next five years shifts away from traditional media to an Internet-based, on-demand strategy.

According to this version of the future, viewers are as likely to use a new BBC search engine — the so-called BBC iPlayer —to find video and audio from its massive archive; play a "Doctor Who" videogame; or post a piece of user-generated content on one of its broadband portals as they are to sit down to watch flagship soap "EastEnders" on TV.

That's what Thompson told his 20,000-person staff as he stressed the pace of technological change was "faster and more radical than anything we've seen before."

"On demand means a rethink of what we commission, make and how we package and distribute it. We have one of the best Web sites in the world, but it's rooted in the first digital wave.

"We need to reinvent it, fill it with dynamic audio-visual content, personalize it, open it up to user-generated content."

But there was more. The 16-24-year-olds who will pay tomorrow's license fee to keep the BBC going ignore much of what the BBC provides. Internal research showed that 60% of 16-24-year-olds watch less than three hours of BBC TV a week.

Thompson announced a new teen brand to be accessed via broadband, TV, radio and mobiles. Additionally, the BBC iPlayer will give auds free access to BBC content for seven days following first broadcast.

Once this window had expired, auds would be able to buy the material on pay-per-view from commercial arm BBC Worldwide. Predictably, the blueprint, part of the BBC's campaign to win a big hike in the li cense fee that funds all its U.K. activities, was greeted unenthusiastically by competitors.

Commercial rivals, some of whom are smarting from the pubcaster's digital expansion (it runs eight U.K. TV channels compared with two a decade ago), denounced the plan as another land grab.

"There's a huge question mark as to whether this is the right use of license-fee money," says Hugo Drayton, chairman of the British Internet Publishers Alliance. "Given the BBC's lavish budgets, cross-subsidy, persistent on-air promotion and staff resources, we would expect a Rolls-Royce service, but this has been at a price. This is a system which, if left undefined, will continue to restrict wider economic activity and, most importantly, consumer choice."

BSkyB, Europe's leading pay TV operator currently beefing up its own Internet activities, was even more forthright. "Commercial business models are emerging for on-demand TV and new media," says group commercial and strategy director Mike Darcey. "It would be a shame if they were choked off by a large free intervention by the BBC."

"We don't want to go out and rape and pillage the rest of the sector," he insists. "It would not work, and that is not the way the BBC is going to prosper.