BBC builds on Dr Who 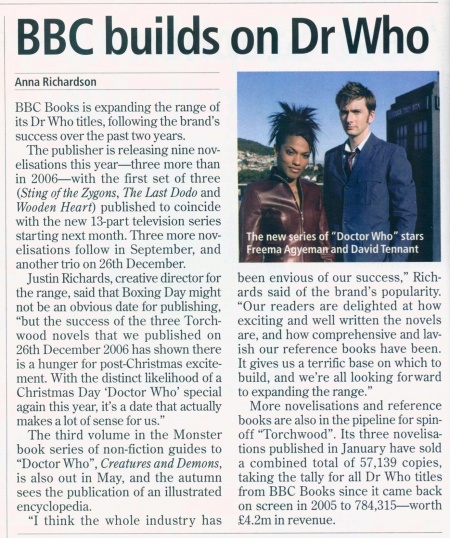 BBC Books is expanding the range of its Dr Who titles, following the brand's success over the past two years.

The publisher is releasing nine novelisations this year—three more than in 2006—with the first set of three (Sting of the Zygons, The Last Dodo and Wooden Heart) published to coincide with the new 13-part television series starting next month. Three more novelisations follow in September, and another trio on 26th December.

Justin Richards, creative director for the range, said that Boxing Day might not be an obvious date for publishing, "but the success of the three Torch-wood novels that we published on 26th December 2006 has shown there is a hunger for post-Christmas excitement. With the distinct likelihood of a Christmas Day 'Doctor Who' special again this year, it's a date that actually makes a lot of sense for us."

The third volume in the Monster book series of non-fiction guides to "Doctor Who", Creatures and Demons, is also out in May, and the autumn sees the publication of an illustrated encyclopedia.

"I think the whole industry has been envious of our success," Richards said of the brand's popularity. "Our readers are delighted at how exciting and well written the novels are, and how comprehensive and lavish our reference books have been. It gives us a terrific base on which to build, and we're all looking forward to expanding the range."

More novelisations and reference books are also in the pipeline for spinoff "Torchwood". Its three novelisations published in January have sold a combined total of 57,139 copies, taking the tally for all Dr Who titles from BBC Books since it came back on screen in 2005 to 784,315—worth £4.2m in revenue.

Caption: The new series of "Doctor Who" stars Freema Agyeman and David Tennant