BBC hopes for a rescue by Doctor Who 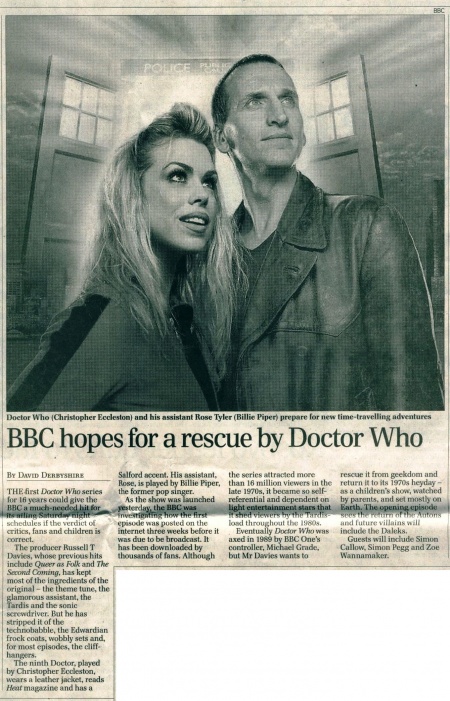 THE first Doctor Who series for 16 years could give the BBC a much-needed hit for its ailing Saturday schedules if the verdict of critics, fans and children is correct.

The producer Russell T Davies, whose previous hits include Queer as Folk and The Second Coming, has kept most of the ingredients of the original - the theme tune, the glamorous assistant, the Tardis and the sonic screwdriver. But he has stripped it of the technobabble, the Edwardian frock coats, wobbly sets and, for most episodes, the cliffhangers.

The ninth Doctor, played by Christopher Eccleston, wears a leather jacket, reads Heat magazine and has a Salford accent. His assistant, Rose, is played by Billie Piper, the former pop singer.

As the show was launched yesterday, the BBC was investigating how the first episode was posted on the internet three weeks before it was due to be broadcast. It has been downloaded by thousands of fans. Although the series attracted more than 16 million viewers in the late 1970s, it became so self-referential and dependent on light entertainment starts that it shed viewers by the Tardis-load throughout the 1980s.

Eventually Doctor Who was axed in 1989 by BBC One's controller, Michael Grade, but Mr Davies wants to rescue it from geekdom and return it to its 1970s heyday as a children's show, watched by parents, and set mostly on Earth. The opening episode sees the return of the Autons and future villains will include the Daleks.

Guests will include Simon Callow, Simon Pegg and Zoe Wannamaker.