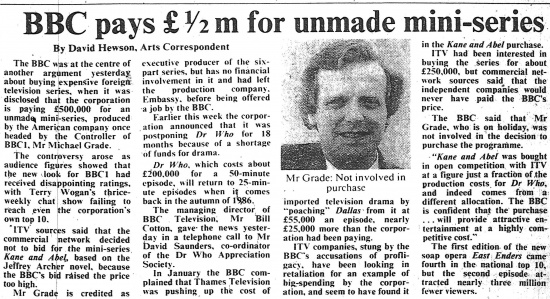 The BBC was at the centre of another argument yesterday about buying expensive foreign television series, when it was disclosed that the corporation is paying £500,000 for an unmade mini-series, produced by the American company once headed by the Controller of BBC1, Mr Michael Grade.

The controversy arose as audience figures showed that the new look for BBC1 had received disappointing ratings, with Terry Wogan's thrice-weekly chat show failing to reach even the corporation's own top 10.

ITV sources said that the commercial network decided not to bid for the mini-series, Kane and Abel, based on the Jeffrey Archer novel, because the BBC's bid raised the price too high.

Mr Grade is credited as executive producer of the six-part series, but has no financial involvement in it and had left the production company, Embassy, before being offered a job by the BBC.

Earlier this week the corporation announced that it was postponing Dr Who for 18 months because of a shortage of funds for drama.

The managing director of BBC Television, Mr Bill Cotton, gave the news yesterday in a telephone call to Mr David Saunders, co-ordinator of the Dr Who Appreciation Society.

In January the BBC complained that Thames Television was pushing up the cost of imported television drama by "poaching" Dallas from it at £55,000 an episode, nearly £25,000 more than the corporation had been paying.

ITV companies, stung by the BBC's accusations of profligacy, have been looking in retaliation for an example of big-spending by the corporation, and seem to have found it in the Kane and Abel purchase.

ITV had been interested in buying the series for about £250,000, but commercial network sources said that the independent companies would never have paid the BBC's price.

The BBC said that Mr Grade, who is on holiday, was not involved in the decision to purchase the programme.

"Kane and Abel" was bought in open competition with ITV at a figure just a fraction of the production costs, for Dr Who, and indeed comes from a different allocation. The BBC is confident that the purchase ... will provide attractive entertainment at a highly competitive cost."