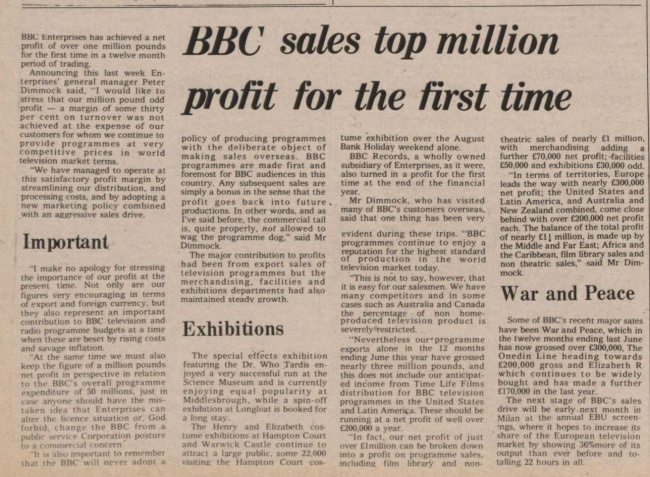 BBC Enterprises has achieved a net profit of over one million pounds for the first time in a twelve month period of trading.

Announcing this last week Enterprises' general manager Peter Dimmock said, "I would like to stress that our million pound odd profit — a margin of some thirty per cent on turnover was not achieved at the expense of our customers for whom we continue to provide programmes at very competitive prices in world television market terms.

"We have managed to operate at this satisfactory profit margin by streamlining our distribution, and processing costs, and by adopting a new marketing policy combined with an aggressive sales drive.

"I make no apology for stressing the importance of our profit at the present time. Not only are our figures very encouraging in terms of export and foreign currency. but they also represent an important contribution to BBC television and radio programme budgets at a time when these are beset by rising costs and savage inflation.

"At the same time we must also keep the figure of a million pounds net profit in perspective in relation to the BBC's overall programme expenditure of 50 millions, just in case anyone should have the mistaken idea that Enterprises can alter the licence situation or. God forbid, change the BBC from a public service Corporation posture to a commercial concern

"It is also important to remember that the BBC will never adopt a policy of producing programmes with the deliberate object of making sales overseas. BBC programmes are made first and foremost for BBC audiences in this country. Any subsequent sales are simply a bonus in the sense that the profit goes back into future productions. In other words, and as I've said before, the commercial tail is, quite properly, not allowed to wag the programme dog." said Mr Dimmock.

The major contribution to profits had been from export sales of television programmes but the merchandising, facilities and exhibitions departments had also maintained steady growth.

The special effects exhibition featuring the Dr. Who Tardis enjoyed a very successful run at the Science Museum and is currently enjoying equal popularity at Middlesbrough. while a spin-off exhibition at Longleat is booked for a long stay.

BBC Records, a wholly owned subsidiary of Enterprises, as it were. also turned in a profit for the first time at the end of the financial year.

Mr Dimmock, who has visited many of BBC's customers overseas, said that one thing has been very evident during these trips. "BBC programmes continue to enjoy a reputation for the highest standard of production in the world television market today.

"This is not to say, however, that it is easy for our salesmen. We have many competitors and in some cases such as Australia and Canada the percentage of non home-produced television product is severely restricted.

"Nevertheless our programme exports alone in the 12 months ending June this year have grossed nearly three million pounds, and this does not include our anticipated income from Time Life Films distribution for BBC television programmes in the United States and Latin America. These should be running at a net profit of well over £200,000 a year.

"In fact, our net profit of just over £lmillion can be broken down into a profit on programme sales. including film library and non-theatric sales of nearly £l million. with merchandising adding a further £70,000 net profit; facilities £50,000 and exhibitions £30,000 odd.

"In terms of territories, Europe leads the way with nearly £300,000 net profit; the United States and Latin America, and Australia and New Zealand combined, come close behind with over £200,000 net profit each. The balance of the total profit of nearly Eli million, is made up by the Middle and Far East: Africa and the Caribbean. film library sales and non theatric sales," said Mr Dimmock

Some of BBC's recent major sales have been War and Peace, which in the twelve months ending last June has now grossed over £300,000, The Onedin Line heading towards £200,000 gross and Elizabeth R which continues to be widely bought and has made a further £170,000 in the last year.

The next stage of BBC's sales drive will be early next month in Milan at the annual EBU screenings, where it hopes to increase its share of the European television market by showing 36% more of its output than ever before and totalling 22 hours in all.