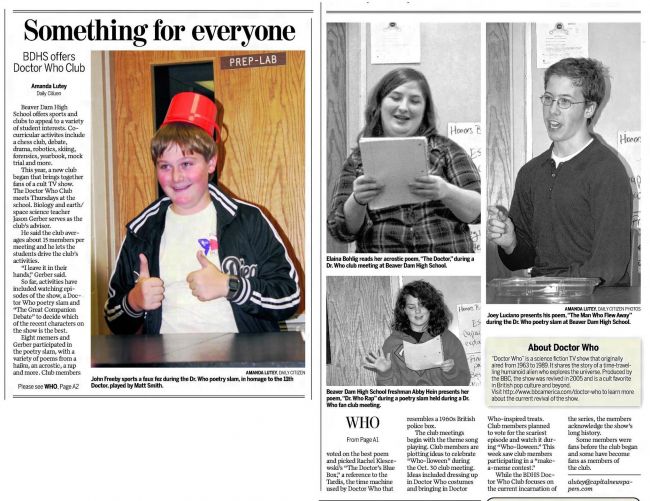 This year, a new club began that brings together fans of a cult TV show. The Doctor Who Club meets Thursdays at the school. Biology and earth/ space science teacher Jason Gerber serves as the club's advisor.

He said the club averages about 15 members per meeting and he lets the students drive the club's activities.

"I leave it in their hands," Gerber said.

So far, activities have included watching episodes of the show, a Doctor Who poetry slam and "The Great Companion Debate" to decide which of the recent characters on the show is the best.

Eight memers and Gerber participated in the poetry slam, with a variety of poems from a haiku, an acrostic, a rap and more. Club members voted on the best poem and picked Rachel Klescewski's "The Doctor's Blue Box!' a reference to the Tardis, the time machine used by Doctor Who that resembles a 1960s British police box.

While the BDHS Doctor Who Club focuses on the current incarnation of the series, the members acknowledge the show's long history.

Some members were fans before the club began and some have become fans as members of the club.

"Doctor Who" is a science fiction TV show that originally aired from 1963 to 1989. It shares the story of a time-travelling humanoid alien who explores the universe. Produced by the BBC, the show was revived in 2005 and is a cult favorite in British pop culture and beyond.

Visit http://www.bbcamerica.com/doctor-who to learn more about the current revival of the show.

John Freeby sports a faux fez during the Dr. Who poetry slam, in homage to the 11th Doctor, played by Matt Smith.