Back to the future (The Bookseller) 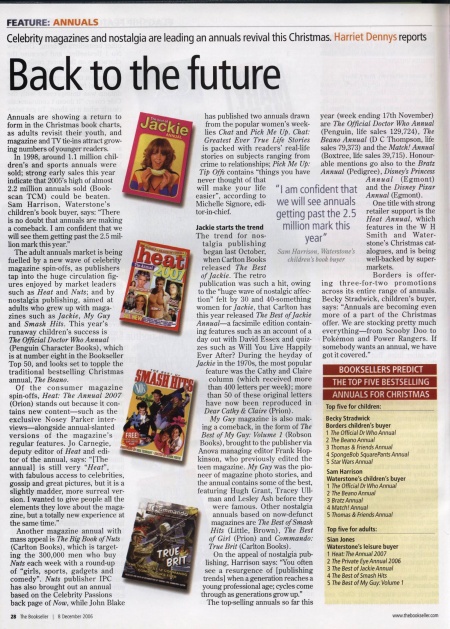 Celebrity magazines and nostalgia are leading an annuals revival this Christmas

Annuals are showing a return to form in the Christmas book charts, as adults revisit their youth, and magazine and TV tie-ins attract growing numbers of younger readers.

In 1998, around 1.1 million children's and sports annuals were sold; strong early sales this year indicate that 2005's high of almost 2.2 million annuals sold (Bookscan TCM) could be beaten. Sam Harrison, Waterstone's children's book buyer, says: --"There is no doubt that annuals are making a comeback. I am confident that we will see them getting past the 2.5 million mark this year."

The adult annuals market is being fuelled by a new wave of celebrity magazine spin-offs, as publishers tap into the huge circulation figures enjoyed by market leaders such as Heat and Nuts; and by nostalgia publishing, aimed at adults who grew up with magazines such as Jackie, My Guy and Smash Hits. This year's runaway children's success is The Official Doctor Who Annual (Penguin Character Books), which is at number eight in the Bookseller Top 50, and looks set to topple the traditional bestselling Christmas annual, The Beano.

Of the consumer magazine spin-offs, Heat: The Annual 2007 (Orion) stands out because it contains new content--such as the exclusive Nosey Parker inter views--alongside annual-slanted versions of the magazine's regular features. Jo Carnegie, deputy editor of Heat and editor of the annual, says: "[The annual] is still very "Heat", with fabulous access to celebrities, gossip and great pictures, but it is a slightly madder, more surreal version. I wanted to give people all the elements they love about the magazine, but a totally new experience at the same time."

Another magazine annual with mass appeal is The Big Book of Nuts (Carlton Books), which is targeting the 300,000 men who buy Nuts each week with a round-up of "girls, sports, gadgets and comedy". Nuts publisher IPC has also brought out an annual based on the Celebrity Passions back page of Now, while John Blake has published two annuals drawn from the popular women's weeklies Chat and Pick Me Up. Chat: Greatest Ever True Life Stories is packed with readers' real-life stories on subjects ranging from crime to relationships; Pick Me Up: Tip Offs contains "things you have never thought of that will make your life easier", according to Michelle Signore, editor-in-chief.

The trend for nostalgia publishing began last October, when Carlton Books released The Best of Jackie. The retro publication was such a hit, owing to the "huge wave of nostalgic affection" felt by 30 and 40-something women for Jackie, that Carlton has this year released The Best of Jackie Annual--a facsimile edition containing features such as an account of a day out with David Essex and quizzes such as Will You Live Happily Ever After? During the heyday of Jackie in the 1970s, the most popular feature was the Cathy and Claire column (which received more than 400 letters per week); more than 50 of these original letters have now been reproduced in Dear Cathy & Claire (Prion).

My Guy magazine is also making a comeback, in the form of The Best of My Guy: Volume I (Robson Books), brought to the publisher via Anova managing editor Frank Hopkinson, who previously edited the teen magazine. My Guy was the pioneer of magazine photo stories, and the annual contains some of the best, featuring Hugh Grant, Tracey Ullman and Lesley Ash before they were famous. Other nostalgia annuals based on now-defunct magazines are The Best of Smash Hits (Little, Brown), The Best of Girl (Prion) and Commando: True Brit (Carlton Books).

On the appeal of nostalgia publishing, Harrison says: "You often see a resurgence of [publishing trends] when a generation reaches a young professional age; cycles come through as generations grow up."

One title with strong retailer support is the Heat Annual, which features in the W H Smith and Waterstone's Christmas catalogues, and is being well-backed by supermarkets.

Borders is offering three-for-two promotions across its entire range of annuals. Becky Stradwick, children's buyer, says: "Annuals are becoming even more of a part of the Christmas offer. We are stocking pretty much everything--from Scooby Doo to Pokémon and Power Rangers. If somebody wants an annual, we have got it covered."

1 The Official Dr Who Annual

1 The Official Dr Who Annual

3 The Best of Jackie Annual

4 The Best of Smash Hits