Bad news for Daleks as the doctor is reincarnated 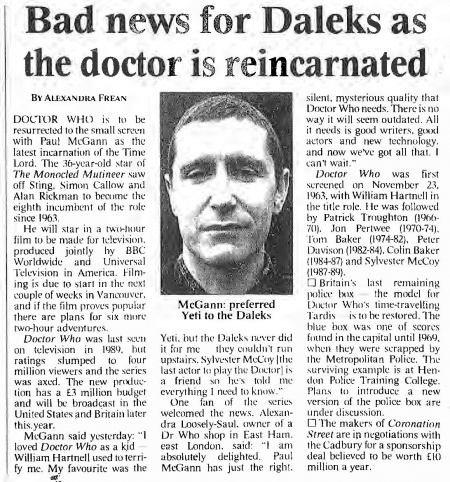 Doctor Who is to be resurrected to the small screen with Paul McGann as the latest incarnation of the Time Lord. The 36-year-old star of The Monocled Mutineer saw off Sting, Simon Callow and Alan Rickman to become the eighth incumbent of the role since 1963.

He will star in a two-hour film to be made for television, produced jointly by BBC Worldwide and Universal Television in America. Filming is due to start in the next couple of weeks in Vancouver, and if the film proves popular there are plans for six more two-hour adventures.

Doctor Who was last seen on television in 1989, but ratings slumped to four million viewers and the series was axed. The new production has a £3 million budget and will be broadcast in the United States and Britain later this year.

McGann said yesterday: "I loved Doctor Who as a kid William Hartnell used to terrify me. My favourite was the Yeti, but the Daleks never did it for me -- they couldn't run upstairs. Sylvester McCoy the last actor to play the Doctor is a friend so he's told me everything I need to know."

One fan of the series welcomed the news. Alexandra Loosely-Saul, owner of a Dr Who shop in East Ham, east London, said: "I am absolutely delighted. Paul McGann has just the right, silent, mysterious quality that Doctor Who needs. There is no way it will seem outdated. All it needs is good writers, good actors and new technology, and now we've got all that. I can't wait."

Britain's last remaining police box — the model for Doctor Who's time-travelling Tardis — is to be restored. The blue box was one of scores found in the capital until 1969, when they were scrapped by the Metropolitan Police. The surviving example is at Hendon Police Training College. Plans to introduce a new version of the police box are under discussion.