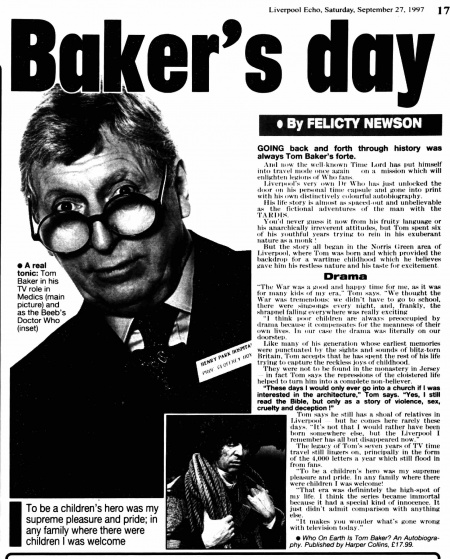 GOING back and forth through history was always Tom Baker's forte.

And now the well-known Time Lord has put himself into travel mode once again on a mission which will enlighten legions of Who fans.

Liverpool's very own Dr Who has just unlocked the thaw un his personal time capsule and gone into print with his own distinctively colourful autobiography.

His life story is almost as spaced-out and unbelievable as the fictional adventures of the man with the TARDIS.

You'd never guess it now from his fruity language or his anarchically irreverent attitudes, but Tom spent six of his youthful years trying to rein in his exuberant nature as a monk.

But the story all began in the Norris Green area of Liverpool, where Tom was born and which provided the backdrop for a wartime childhood which he believes gave him his restless nature and his taste for excitement.

"The War was a good and happy time for me, as it was for many kids of my era," Tom says. "We thought the War was tremendous: we didn't have to go to school, there were singsongs every night, and, frankly, the shrapnel falling everywhere was really exciting.

"I think poor children are always preoccupied by drama because it compensates for the meanness of their own lives. In our case the drama was literally on our doorstep.

Like many of his generation whose earliest memories were punctuated by the sights and sounds of blitz-torn Britain. Tom accepts that he has spent the rest of his life trying to capture the reckless joys of childhood.

They were not to be found in the monastery in Jersey - in fact Tom says the repressions of the cloistered life helped to turn him into a complete non-believer.

"These days I would only ever go into a church if I was interested in the architecture," Tom says. "Yes, I still read the Bible, but only as a story of violence, sex, cruelty and deception !"

Tom says he still has a shoal of relatives in Liverpool but he comes hem rarely these days. "It's not that I would rather have been born somewhere else, but the Liverpool I remember has all but disappeared now."

The legacy of Tom's seven years of TV time travel still lingers on, principally in the form of the 4,000 letters a year which still flood in from fans.

"To be a children's hero was my supreme pleasure and pride. In any family where there were children I was welcome!

"That era was definitely the high-spot of my life. I think the series became immortal because it had a special kind of innocence. It just didn't admit comparison with anything else.

"It makes you wonder what's gone wrong with television today."

Who On Earth Is Tom Baker? An Autobiography. Published by Harper Collins, £17.99.

Caption: A real tonic: Tom Baker in his TV role in Medics (main picture) and as the Beeb's Doctor Who (inset)