Bang on time...the Tardis touches down by Big Ben 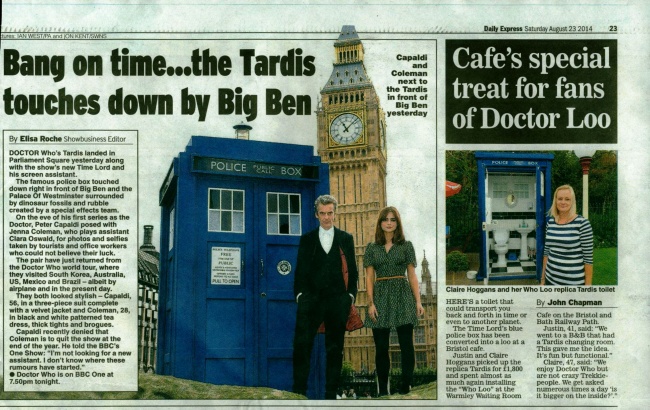 DOCTOR Who's Tardis landed in Parliament Square yesterday along with the show's new Time Lord and his screen assistant.

The famous police box touched down right in front of Big Ben and the Palace Of Westminster surrounded by dinosaur fossils and rubble created by a special effects team.

On the eve of his first series as the Doctor, Peter Capaldi posed with Jenna Coleman, who plays assistant Clara Oswald, for photos and selfies taken by tourists and office workers who. could not believe their luck.

The pair have just returned from the Doctor Who world tour, where they visited South Korea, Australia, US, Mexico and Brazil — albeit by airplane and in the present day.

They both looked stylish — Capaldi, 56, in a three-piece suit complete with a velvet jacket and Coleman, 28, in black and white patterned tea dress, thick tights and brogues.

Capaldi recently denied that Coleman is to quit the show at the end of the year. He told the BBC's One Show: "I'm not looking for a new assistant. I don't know where these rumours have started."

HERE'S a toilet that could transport you back and forth in time or even to another planet.

The Time Lord's blue police box has been converted into a loo at a Bristol cafe.

Justin and Claire Hoggans picked up the replica Tardis for £1,800 and spent almost as much again installing the "Who Loo" at the Warmley Waiting Room By John Chapman

Cafe on the Bristol and Bath Railway Path.

Justin, 41, said: "We went to a B&B that had a Tardis changing room. This gave me the idea. It's fun but functional."

Claire, 47, said: "We enjoy Doctor Who but are not crazy Trekkie-people. We get asked numerous times a day 'is it bigger on the inside?'."

Caption: Claire Hoggans and her Who Loo replica Tardis toilet