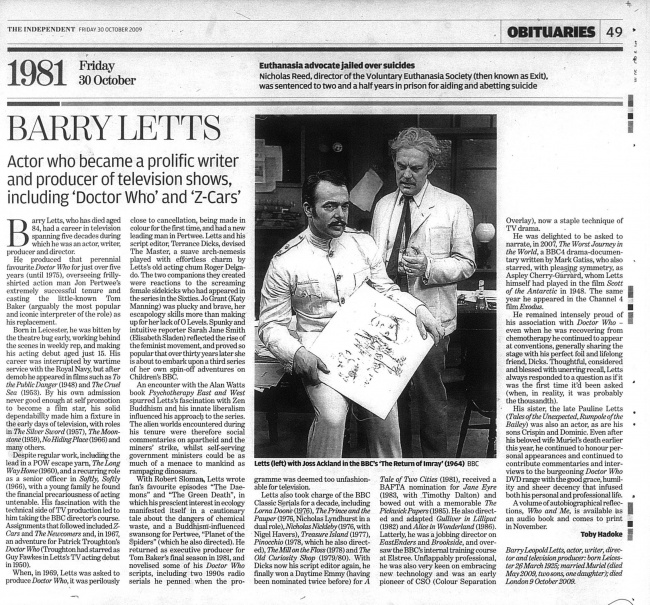 Actor who became a prolific writer and producer of television shows, including 'Doctor Who' and 'Z-Cars'

Barry Letts, who has died aged 84, had a career in television spanning five decades during which he was an actor, writer, producer and director.

He produced that perennial favourite Doctor Who for just over five years (until 1975), overseeing frilly-shirted action man Jon Pertwee's extremely successful tenure and casting the little-known Tom Baker (arguably the most popular and iconic interpreter of the role) as his replacement.

Born in Leicester, he was bitten by the theatre bug early, working behind the scenes in weekly rep, and making his acting debut aged just 15. His career was interrupted by wartime service with the Royal Navy, but after demob he appeared in films such as To the Public Danger (1948) and The Cruel Sea (1953). By his own admission never good enough at self promotion to become a film star, his solid dependability made him a fixture in the early days of television, with roles in The Silver Sword (1957), The Moonstone (1959), No Hiding Place (1966) and many others.

Despite regular work, including the lead in a POW escape yarn, The Long Way Home (1960), and a recurring role as a senior officer in Softly, Softly (1966), with a young family he found the financial precariousness of acting untenable. His fascination with the technical side of TV production led to him taking the BBC director's course. Assignments that followed included Z-Cars and The Newcomers and, in 1967, an adventure for Patrick Troughton's Doctor Who (Troughton had starred as Guy Fawkes in Letts's TV acting debut in 1950).

When, in 1969, Letts was asked to produce Doctor Who, it was perilously close to cancellation, being made in colour for the first time, and had a new leading man in Pertwee. Letts and his script editor, Terrance Dicks, devised The Master, a suave arch-nemesis played with effortless charm by Letts's old acting chum Roger Delgado. The two companions they created were reactions to the screaming female sidekicks who had appeared in the series in the Sixties. Jo Grant (Katy Manning) was plucky and brave, her escapology skills more than making up for her lack of O Levels. Spunky and intuitive reporter Sarah Jane Smith (Elisabeth Sladen) reflected the rise of the feminist movement, and proved so popular that over thirty years later she is about to embark upon a third series of her own spin-off adventures on Children's BBC.

An encounter with the Alan Watts book Psychotherapy East and West spurred Letts's fascination with Zen Buddhism and his innate liberalism influenced his approach to the series. The alien worlds encountered during his tenure were therefore social commentaries on apartheid and the miners' strike, whilst self-serving government ministers could be as much of a menace to mankind as rampaging dinosaurs.

With Robert Sloman, Letts wrote fan's favourite episodes "The Daemons" and "The Green Death", in which his prescient interest in ecology manifested itself in a cautionary tale about the dangers of chemical waste, and a Buddhism-influenced swansong for Pertwee, "Planet of the Spiders" (which he also directed). He returned as executive producer for Tom Baker's final season in 1981, and novelised some of his Doctor Who scripts, including two 1990s radio serials he penned when the programme was deemed too unfashionable for television.

Letts also took charge of the BBC Classic Serials for a decade, including Lorna Doone (1976), The Prince and the Pauper (1976, Nicholas Lyndhurst in a dual role), Nicholas Nickleby (1976, with Nigel Havers), Treasure Island (1977), Pinocchio (1978, which he also directed), The Mill on the Floss (1978) and The Old Curiosity Shop (1979/80). With Dicks now his script editor again, he finally won a Daytime Emmy (having been nominated twice before) for A Tale of Two Cities (1981), received a BAFTA nomination for Jane Eyre (1983, with Timothy Dalton) and bowed out with a memorable The Pickwick Papers (1985). He also directed and adapted Gulliver in Lilliput (1982) and Alice in Wonderland (1986). Latterly, he was a jobbing director on EastEnders and Brookside, and oversaw the BBC's internal training course at Elstree. Unflappably professional, he was also very keen on embracing new technology and was an early pioneer of CSO (Colour Separation Overlay), now a staple technique of TV drama.

He was delighted to be asked to narrate, in 2007, The Worst Journey in the World, a BBC4 drama-documentary written by Mark Gatiss, who also starred, with pleasing symmetry, as Aspley Cherry-Garrard, whom Letts himself had played in the film Scott of the Antarctic in 1948. The same year he appeared in the Channel 4 film Exodus.

He remained intensely proud of his association with Doctor Who - even when he was recovering from chemotherapy he continued to appear at conventions, generally sharing the stage with his perfect foil and lifelong friend, Dicks. Thoughtful, considered and blessed with unerring recall, Letts always responded to a question as if it was the first time it'd been asked (when, in reality, it was probably the thousandth).

His sister, the late Pauline Letts (Tales of the Unexpected, Rumpole of the Bailey) was also an actor, as are his sons Crispin and Dominic. Even after his beloved wife Muriel's death earlier this year, he continued to honour personal appearances and continued to contribute commentaries and interviews to the burgeoning Doctor Who DVD range with the good grace, humility and sheer decency that infused both his personal and professional life.

A volume of autobiographical reflections, Who and Me, is available as an audio book and comes to print in November.