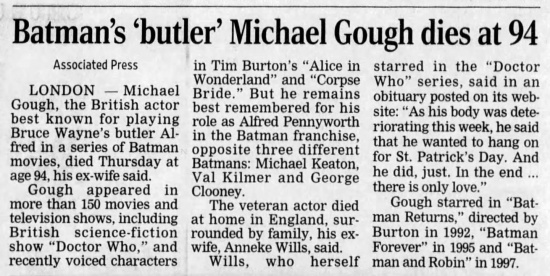 Christine Loss FILE - In this 1997 photo originally released by Warner Bros. Pictures, Michael Gough portrays Alfred, the trusted butler of Bruce Wayne in a scene from the movie "Batman and Robin." Gough, the British actor who performed in more than 150 movies and television shows, including British science-fiction show "Doctor Who," died at home in England on Thursday, March 17, 2011. He was 94. (AP Photo/Warner Bros. Pictures, Christine Loss)

Gough appeared in more than 150 movies and television shows, including British science-fiction show "Doctor Who," and recently voiced characters in Tim Burton's "Alice in Wonderland" and "Corpse Bride." But he remains best remembered for his role as Alfred Pennyworth in the Batman franchise, opposite three different Batmans: Michael Keaton, Val Kilmer and George Clooney.

The veteran actor died at home in England, surrounded by family, his ex-wife Anneke Wills said through her agent.

Wills, who herself starred in the "Dr. Who," said in an obituary posted on its website: "As his body was deteriorating this week, he said that he wanted to hang on for St. Patrick's Day. And he did, just. In the end ... there is only love."